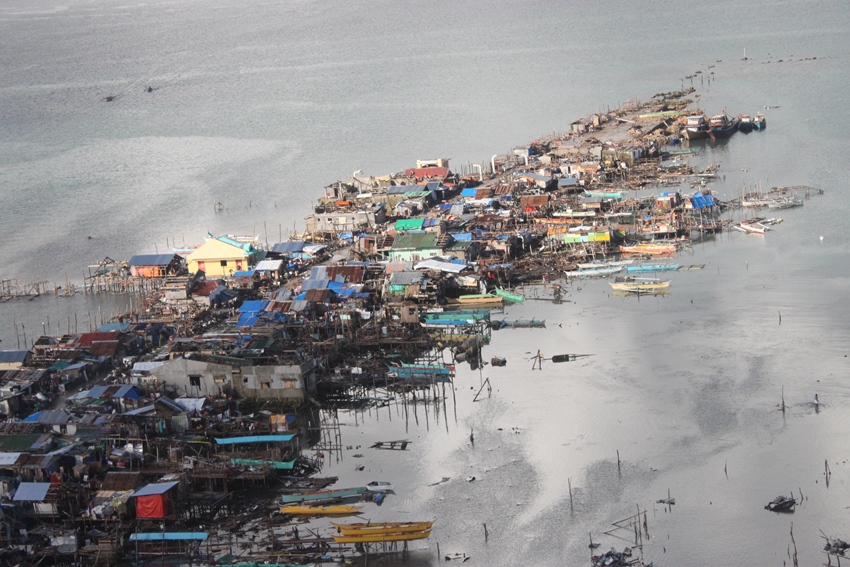 More than 167,000 hectares of Philippines coastland — about 0.6 percent of the country’s total area — are projected to go underwater in, especially in low-lying island communities, according to research by the University of the Philippines.

Low-lying countries with an abundance of coastlines are at significant risk from rising sea levels resulting from global warming. According to data by the World Meteorological Organization, the water levels around the Philippines are rising at a rate almost three times the global average due partly to the influence of the trade winds pushing ocean currents.

On average, sea levels around the world rise 3.1 centimeters every ten years. Water levels in the Philippines are projected to rise between 7.6 and 10.2 centimeters each decade.

IDRC reports that the Philippines government has been forced to take this into consideration. A number of governmental and nongovernmental organizations have sprung up in recent years to address the issue. The Department of Environment and National Resources has its own climate change office, which has set up various programs to educate communities in high-risk areas. One program, for example, teaches communities to adapt to rising sea levels by ensuring that public spaces, such as community halls and schools, are not built near the coast.

Soon, however, adaptation on a local level will not be enough. Policy makers need to convince governments to curb their emissions on a global level.

The earth’s oceans were a hot topic at the Our Common Future under Climate Change conference held in Paris in July.

“The ocean moderates climate change at the cost of profound alterations to its physics, chemistry, ecology and services,” says Gattuso. “However, despite the ocean’s critical role in global ecosystem processes and services, international climate negotiations have only minimally touched on ocean impacts. Any new climate regime that fails to minimize ocean impacts will be incomplete and inadequate,” he says.

This is changing, however,. The Intergovernmental Panel on Climate Change’s Fifth Assessment Report 2013 indicated that if emissions continue on their current trend, we could face a “significant increase” in sea level extremes with risks of coastal flooding.

A new study, published in October 2014 in Environmental Research Letters, paints an even scarier picture. Sea levels could rise by a maximum of 190 centimeters (higher than the average person) by the end of the century. Low-lying coastal communities, such as in Bangladesh, could be most at risk.

Research in the journal Science, which was released during the Climate Change conference in July, also emphasizes the importance that research addresses the effects of rising sea levels.

IDRC notes that in the Science study, researchers compared the fate of the oceans under two scenarios: one a business-as-usual approach and the other involving drastic cuts in emissions. Their analyses showed that business-as-usual would have an enormous and effectively irreversible impact on ocean ecosystems and the services they provide, such as fisheries, by 2100.

“Our present climate is warming to a level associated with significant polar ice-sheet loss in the past. Studies such as these that improve our understanding of magnitudes of global sea-level rise due to polar ice-sheet loss are critical for society,” states Anders Carlson, co-author and associate professor of geology and geophysics at Oregon State University in the Intergovernmental Panel on Climate Change Fifth Assessment Report 2013.