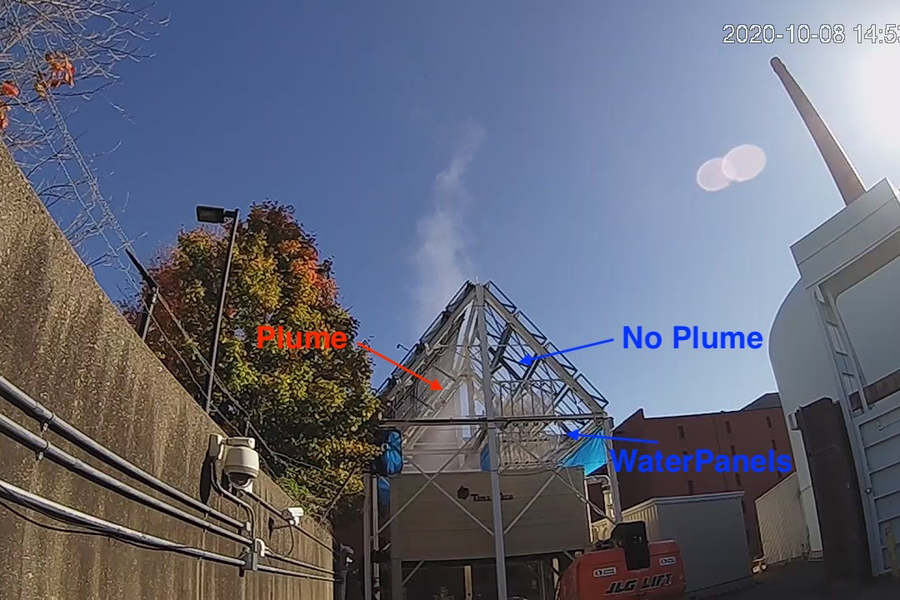 About two-fifths of all the water that gets withdrawn from lakes, rivers, and wells in the U.S. is used not for agriculture, drinking, or sanitation, but to cool the power plants that provide electricity from fossil fuels or nuclear power. Over 65 percent of these plants use evaporative cooling, leading to huge white plumes that billow from their cooling towers, which can be a nuisance and, in some cases, even contribute to dangerous driving conditions.

Now, a small company based on technology recently developed at MIT by the Varanasi Research Group is hoping to reduce both the water needs at these plants and the resultant plumes — and to potentially help alleviate water shortages in areas where power plants put pressure on local water systems.

The technology is surprisingly simple in principle, but developing it to the point where it can now be tested at full scale on industrial plants was a more complex proposition. That required the real-world experience that the company’s founders gained from installing prototype systems, first on MIT’s natural-gas-powered cogeneration plant and then on MIT’s nuclear research reactor.

In these demanding tests, which involved exposure to not only the heat and vibrations of a working industrial plant but also the rigors of New England winters, the system proved its effectiveness at both eliminating the vapor plume and recapturing water. And, it purified the water in the process, so that it was 100 times cleaner than the incoming cooling water. The system is now being prepared for full-scale tests in a commercial power plant and in a chemical processing plant.

“Campus as a living laboratory”

The technology was originally envisioned by professor of mechanical engineering Kripa Varanasi to develop efficient water-recovery systems by capturing water droplets from both natural fog and plumes from power plant cooling towers. The project began as part of doctoral thesis research of Maher Damak PhD ’18, with funding from the MIT Tata Center for Technology and Design, to improve the efficiency of fog-harvesting systems like the ones used in some arid coastal regions as a source of potable water. Those systems, which generally consist of plastic or metal mesh hung vertically in the path of fogbanks, are extremely inefficient, capturing only about 1 to 3 percent of the water droplets that pass through them.

Varanasi and Damak found that vapor collection could be made much more efficient by first zapping the tiny droplets of water with a beam of electrically charged particles, or ions, to give each droplet a slight electric charge. Then, the stream of droplets passes through a wire mesh, like a window screen, that has an opposite electrical charge. This causes the droplets to be strongly attracted to the mesh, where they fall away due to gravity and can be collected in trays placed below the mesh.

Lab tests showed the concept worked, and the researchers, joined by Karim Khalil PhD ’18, won the MIT $100K Entrepreneurship Competition in 2018 for the basic concept. The nascent company, which they called Infinite Cooling, with Damak as CEO, Khalil as CTO, and Varanasi as chairperson, immediately went to work setting up a test installation on one of the cooling towers of MIT’s natural-gas-powered Central Utility Plant, with funding from the MIT Office of Sustainability. After experimenting with various configurations, they were able to show that the system could indeed eliminate the plume and produce water of high purity.

Professor Jacopo Buongiorno in the Department of Nuclear Science and Engineering immediately spotted a good opportunity for collaboration, offering the use of MIT’s Nuclear Reactor Laboratory research facility for further testing of the system with the help of NRL engineer Ed Block. With its 24/7 operation and its higher-temperature vapor emissions, the plant would provide a more stringent real-world test of the system, as well as proving its effectiveness in an actual operating reactor licensed by the Nuclear Regulatory Commission, an important step in “de-risking” the technology so that electric utilities could feel confident in adopting the system.

After the system was installed above one of the plant’s four cooling towers, testing showed that the water being collected was more than 100 times cleaner than the feedwater coming into the cooling system. It also proved that the installation — which, unlike the earlier version, had its mesh screens mounted vertically, parallel to the vapor stream — had no effect at all on the operation of the plant. Video of the tests dramatically illustrates how as soon as the power is switched on to the collecting mesh, the white plume of vapor immediately disappears completely.

The high temperature and volume of the vapor plume from the reactor’s cooling towers represented “kind of a worst-case scenario in terms of plumes,” Damak says, “so if we can capture that, we can basically capture anything.”

Working with MIT’s Nuclear Reactor Laboratory, Varanasi says, “has been quite an important step because it helped us to test it at scale. … It really both validated the water quality and the performance of the system.” The process, he says, “shows the importance of using the campus as a living laboratory. It allows us to do these kinds of experiments at scale, and also showed the ability to sustainably reduce the water footprint of the campus.”

Power plant plumes are often considered an eyesore and can lead to local opposition to new power plants because of the potential for obscured views, and even potential traffic hazards when the obscuring plumes blow across roadways. “The ability to eliminate the plumes could be an important benefit, allowing plants to be sited in locations that might otherwise be restricted,” Buongiorno says. At the same time, the system could eliminate a significant amount of water used by the plants and then lost to the sky, potentially alleviating pressure on local water systems, which could be especially helpful in arid regions.

The system is essentially a distillation process, and the pure water it produces could go into power plant boilers — which are separate from the cooling system — that require high-purity water. That might reduce the need for both fresh water and purification systems for the boilers.

Thanks to the validation provided by the testing on MIT’s plants, the company has now been able to secure arrangements for its first two installations on operating commercial plants, which should begin later this year. One is a 900-megawatt power plant where the system’s clean water production will be a major advantage, and the other is at a chemical manufacturing plant in the Midwest.

In many locations power plants have to pay for the water they use for cooling, Varanasi says, and the new system is expected to reduce the need for water by up to 20 percent. For a typical power plant, that alone could account for about a million dollars saved in water costs per year, he says.

“Innovation has been a hallmark of the U.S. commercial industry for more than six decades,” says Maria G. Korsnick, president and CEO of the Nuclear Energy Institute, who was not involved in the research. “As the changing climate impacts every aspect of life, including global water supplies, companies across the supply chain are innovating for solutions. The testing of this innovative technology at MIT provides a valuable basis for its consideration in commercial applications.”

How Do Leaders and Influencers Emerge?