Seabirds from Gough Island in the south Atlantic, Marion Island near Antarctica and the coasts of both Hawaii and Western Australia have a dangerous habit: eating plastic. Across 32 species of seabirds sampled from around the globe, an international team from 18 institutions in seven countries found that up to 52 % of the birds not only ate plastic, but also accumulated the plastic’s chemical components in their bodies.

The researchers published their results on October 11th, 2021 in Environmental Monitoring and Contaminants Research.

“Globally, approximately 400 million metric tons of plastics are produced each year, and a portion of these escape into the environment, eventually find their way into the oceans,” said corresponding author Hideshige Takada, professor in the Laboratory of Organic Geochemistry (LOG), Tokyo University of Agriculture and Technology. “When floating on the sea surface or stranded on beaches, plastics are exposed to UV radiation from the sun and break down into smaller fragments.”

These fragments, as well as resin pellets used as plastic feedstock that also make their way into the waterways, are not biodegradable nor do they sink. They are similar in size to seabirds’ natural prey of small fish and insects, and they are light enough to float or move with the currents. 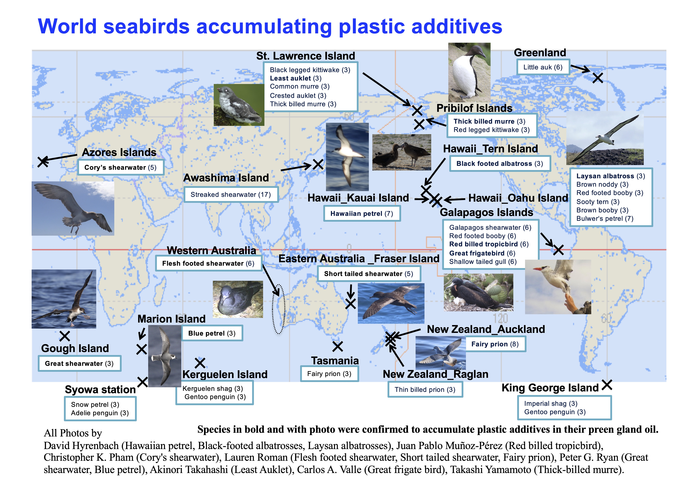 While eating plastic can cause physical damage and be a direct cause for seabird death, according to Takada, little is known about the biological consequences of consuming the chemicals added to bind, stabilize or otherwise improve plastic used in food packing, fishing gear and more.

“It was believed that additives are not easily available for leaching or accumulation in biological tissues as they are kneaded into the polymer matrix during plastic production,” Takada said. “However, it has been demonstrated that oily components in digestive fluids can act as organic solvents to facilitate additive leaching.”

As a result, Takada said, plastic additives can be accumulated in seabirds’ tissue.

“In this study, we aimed to understand the spread threat of plastic-mediated accumulation of chemical additives to seabirds on a global basis,” Takada said.

The researchers analyzed oil from the preen gland, located just above the tail, from 145 seabirds in 16 different locations around the world. By examining the chemical concentrations in this oil, the researchers can determine the contaminant burden of the bird’s internal fat stores. They procured the oil by wiping the gland, which can be done without harm to the bird. They also examined the preen gland oil and stomach contents of 54 bird carcasses found on the beaches.

The researchers found one additive accumulated in 16 of the birds, and other additives in 67 of the birds.

“High concentrations of additives were detected in seabirds that also contained large, ingested plastic loads,” Takada said, noting that the birds could also receive additives initially ingested by their natural prey, these occurrence patterns suggest that additives are derived mainly from directly ingested plastics. “The detection additives demonstrated that significant portions of the world’s seabirds — 10 to 30% — are likely the accumulate chemicals directly from ingesting plastics, but the health consequences of this are not fully understood.”

The researchers plan to further explore the biological effects of the accumulated additives in seabirds.