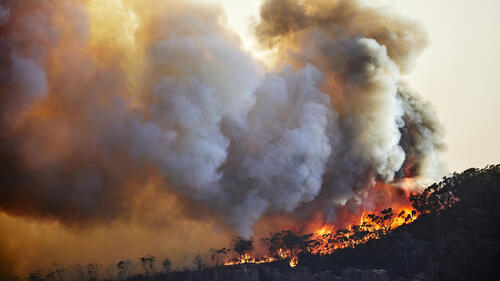 A new study shows that smoke from wildfires destroys the ozone layer. Researchers caution that if major fires become more frequent with a changing climate, more damaging ultraviolet radiation from the sun will reach the ground.

Atmospheric chemists from the University of Waterloo found that smoke from the Australian wildfires of 2019 and 2020 destroyed atmospheric ozone in the Southern Hemisphere for months. The ozone shield is a part of the stratosphere layer of the Earth’s atmosphere that absorbs UV rays from the sun.

The researchers used data from the Canadian Space Agency’s Atmospheric Chemistry Experiment (ACE) satellite to measure the effects of smoke particles in the stratosphere. The results appear in the journal Science.

“The Australian fires injected acidic smoke particles into the stratosphere, disrupting the chlorine, hydrogen and nitrogen chemistry that regulate ozone,” said Peter Bernath, research professor in Waterloo’s Department of Chemistry and lead author of this study. “This is the first large measurement of the smoke, which shows it converting these ozone-regulating compounds into more reactive compounds that destroy ozone.”

Similar to the holes over polar regions, this damage is a temporary effect, and the ozone levels returned to pre-wildfire levels once the smoke disappeared from the stratosphere. But an increase in the prevalence of wildfires would mean the destruction happens more often.

“The ACE satellite is a unique mission with over 18 continuous years of data on atmospheric composition. ACE measures a large collection of molecules to give a better, more complete picture of what is happening in our atmosphere,” Bernath said. “Models can’t reproduce atmospheric smoke chemistry yet, so our measurements provide a unique look at chemistry not seen before.”

The ACE satellite operations are based at the University of Waterloo, and Bernath is the lead mission scientist. The article, Wildfire smoke destroys stratospheric ozone appears in the March 18 issue of Science.

Reservists, Especially Those with Combat Exposure, Are at Risk for Alcohol Misuse After Military Deployment