A study by the Barcelona Institute for Global Health (ISGlobal), a centre supported by the “la Caixa” Foundation, assessed the levels of noise generated by road traffic and examined its impact on health in 749 European cities. The findings, published in Environment International, show that nearly 60 million adults are subjected to unhealthy levels of vehicle-generated noise. Compliance with the World Health Organisation (WHO) noise-level guidelines could prevent 3,600 deaths annually from ischaemic heart disease alone. 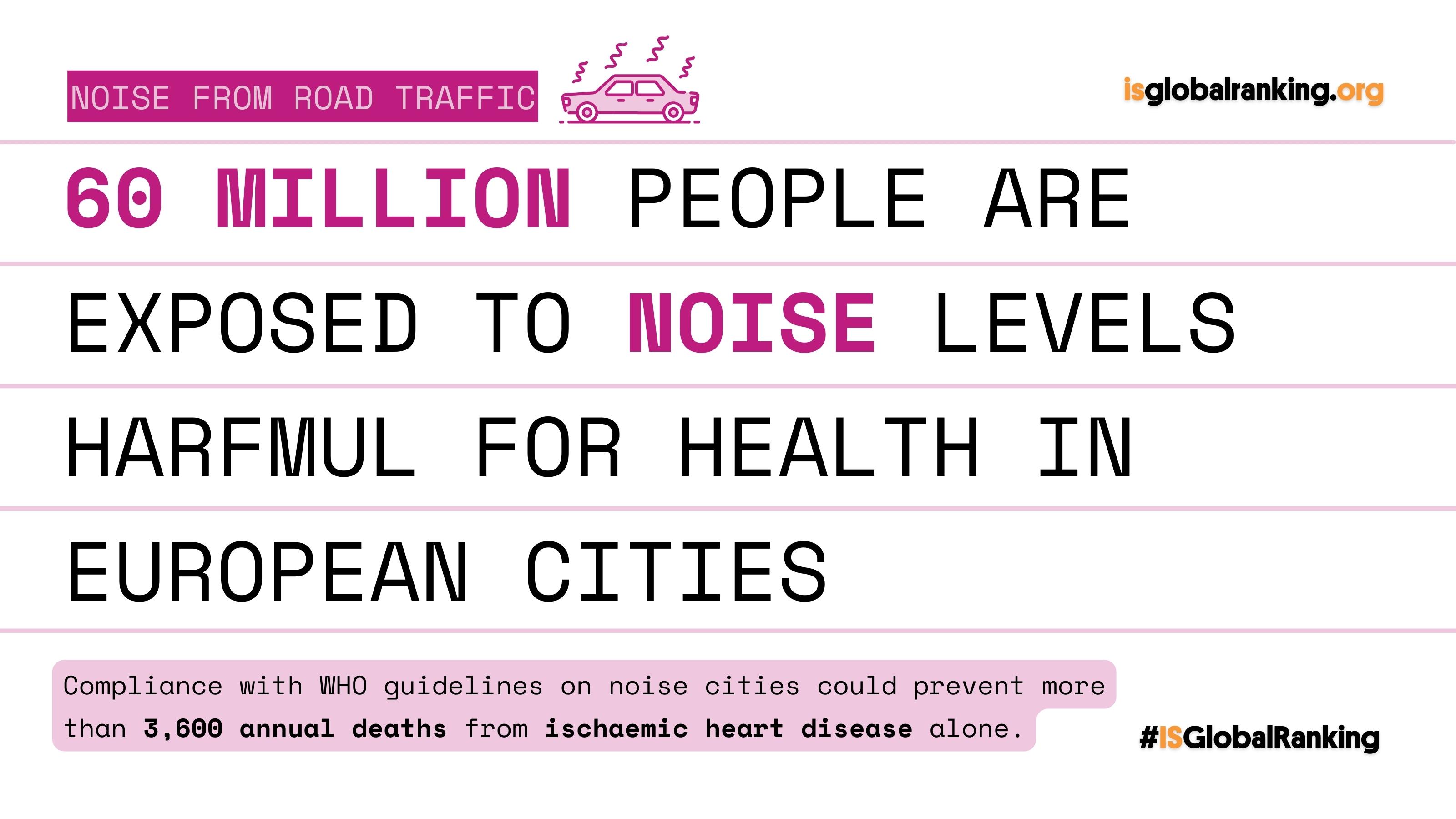 For this study, data on European cities were retrieved from the Urban Audit 2018 dataset. Road traffic noise exposure was estimated using noise maps produced by countries and cities under the current European legislative framework (Environmental Noise Directive) or available from local sources (e.g. city governments and research institutions). For cases in which city-level data were not available, country-specific predictive models were developed and applied to estimate exposure to road traffic noise. Data on different causes of mortality for the year 2015 were retrieved from the Eurostat database.

The results showed that more than 48% of the 123 million adults (aged 20 years or older) included in the study were exposed to noise levels exceeding the WHO-recommended threshold. Specifically, the WHO recommendation states that the average noise level recorded over a 24-hour period should not exceed 53 decibels (53 dB Lden). The percentage of the population exposed to higher-than-recommended noise levels in Europe’s capital cities ranges from 29.8% in Berlin to 86.5% in Vienna, including 43.8% in Madrid and 60.5% in Rome. 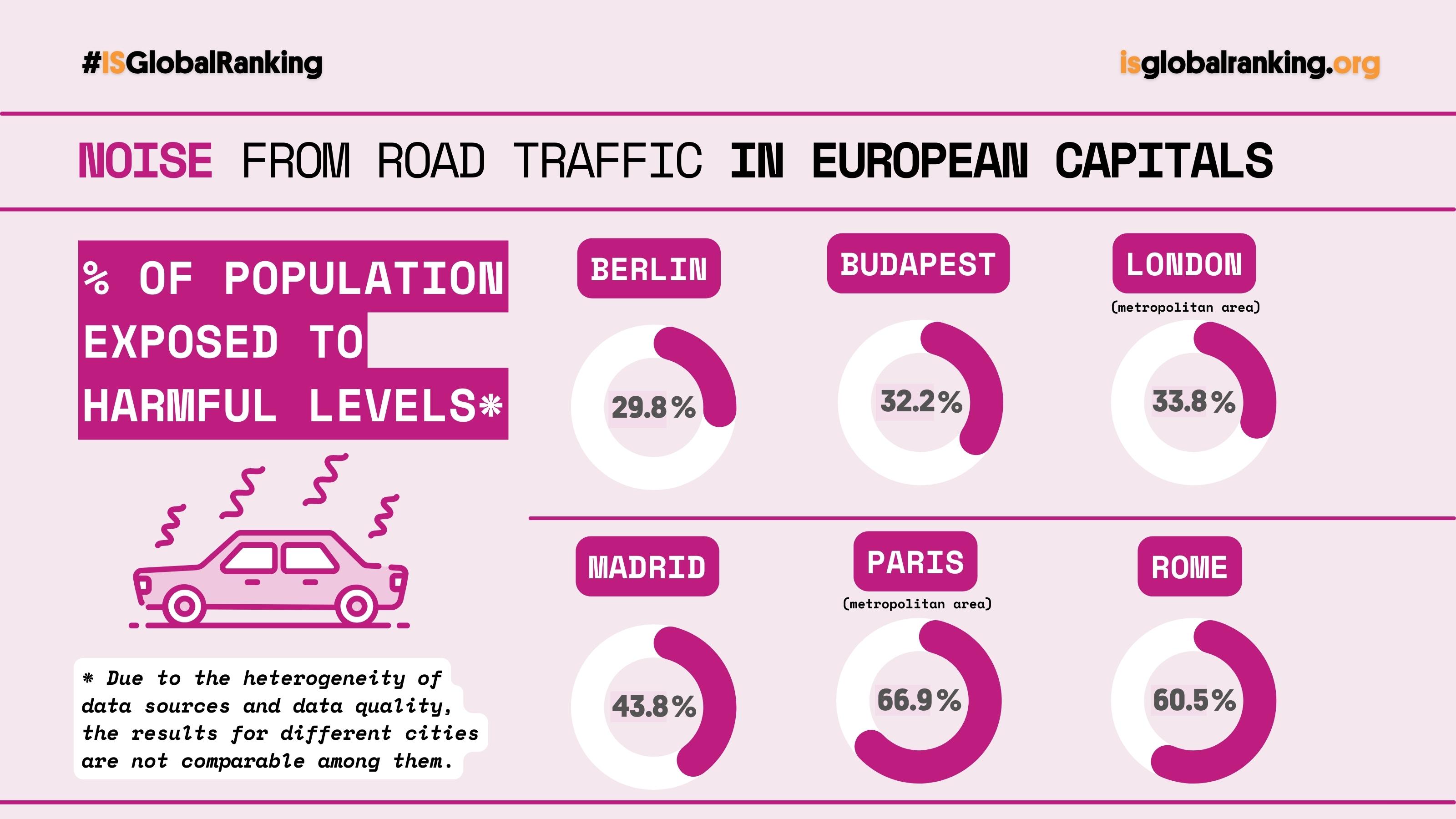 The study also found that more than 11 million adults were highly annoyed by road traffic noise. Annoyance was defined as the repeated disturbance of everyday activities, such as communicating, reading, working and sleeping. In this sense, annoyance goes beyond mere inconvenience, as it can increase stress and eventually give rise to various health problems. 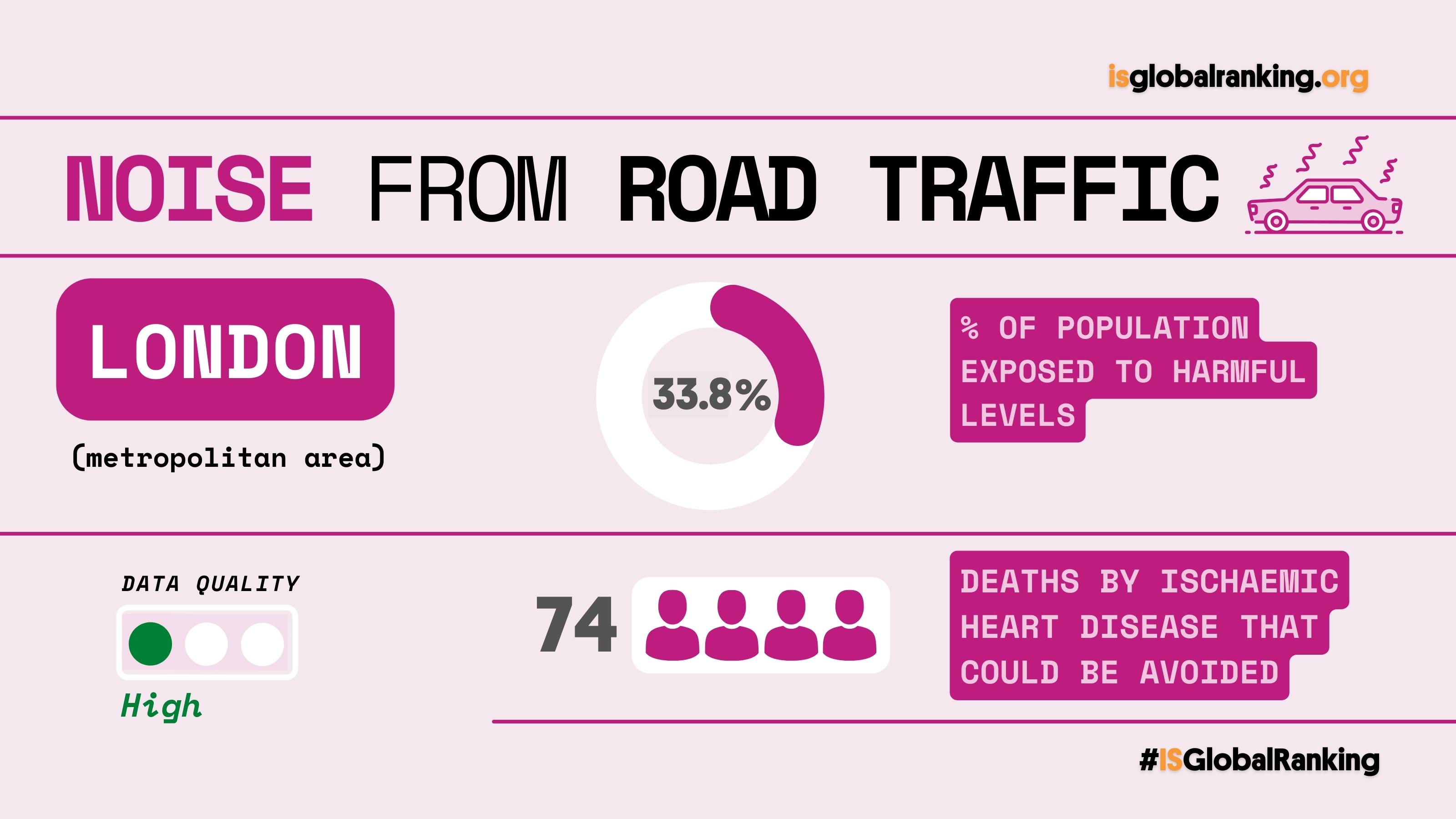 “Our results provide, for the first time, a comprehensive picture of European cities and a clearer understanding of why transport-generated noise is the second major environmental cause of adverse health outcomes in western Europe, after airborne particulate matter,” explained ISGlobal researcher Sasha Khomenko, lead author of the study. “Even so, we are convinced that the true health impact of traffic noise is much greater, as the lack of city-level data limits the health effects we can assess, thus leading to an underestimation of the impact. Moreover, the available data have only allowed us to analyse the population exposed to more than 55 dB Lden, whereas the WHO-recommended threshold is 53 dB Lden, and we suspect that adverse effects could occur even with exposure to lower noise levels.”

The team encountered methodological difficulties due to the heterogeneity and quality of the available data. The quality of each noise map was assessed, with most maps falling into the low or moderate quality categories; less than 17% of the maps were considered to be of good quality. 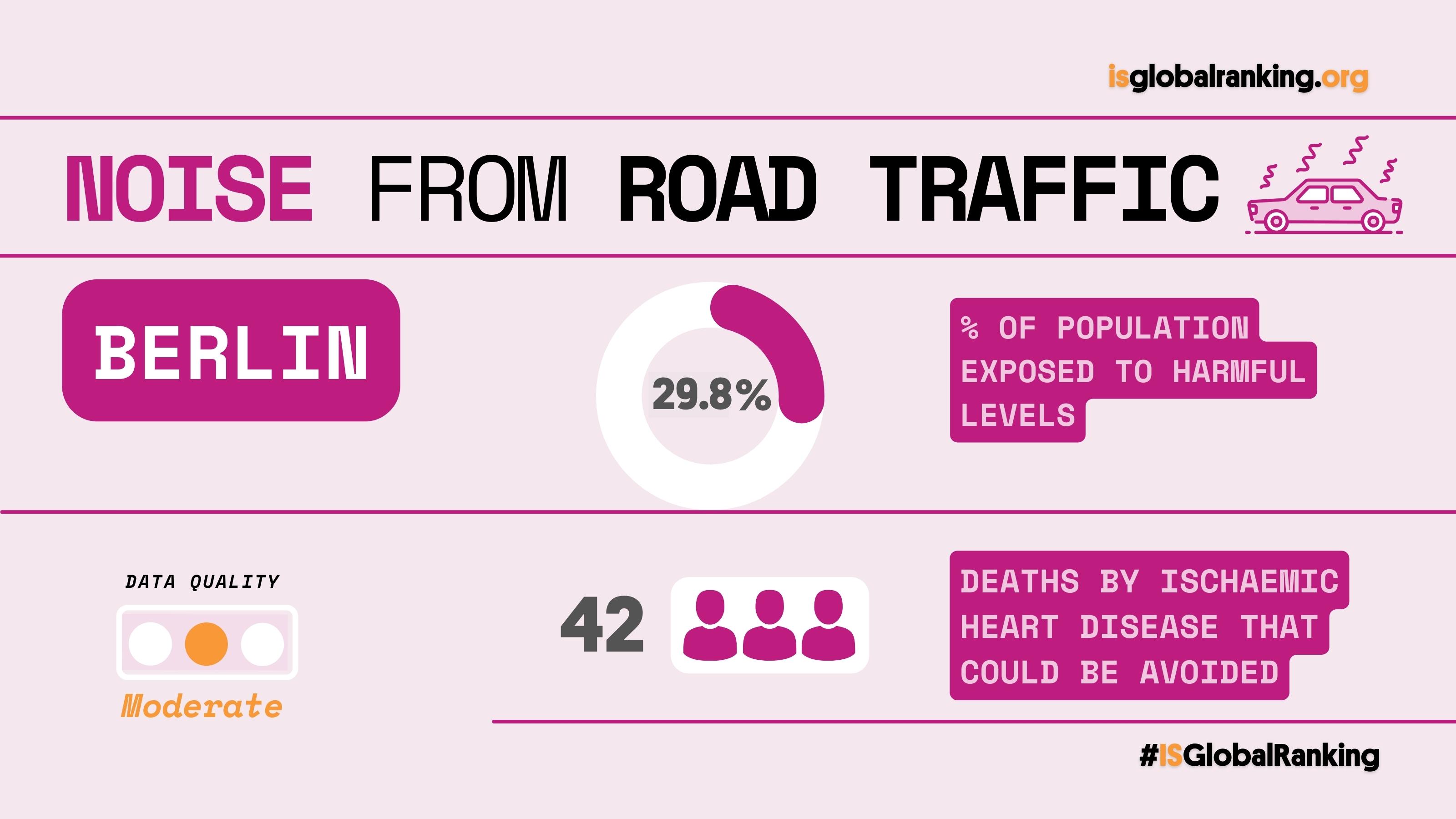 “The European directive on environmental noise made strategic noise mapping mandatory, but it did not set out a specific methodology or guidelines, so the results have been mixed,” commented Mark Nieuwenhuijsen, head of the Air Pollution and Urban Environment programme at ISGlobal and senior author of the study. “The EU member states have had a common methodology since January 2019, so we can expect to see much more comprehensive and accurate health impact assessments of traffic noise in the coming years.”

Consult Data for All 749 Cities

This study forms part of the European Urban Burden of Disease Project, which so far has produced rankings of mortality associated with air pollution and green space, respectively, in European cities. However, due to differences in methodologies and sources of traffic noise data, the results obtained for the various cities analysed are not considered to be comparable. As a result, a road-noise ranking was not produced, although all data have been posted on the project website, where values for all 749 cities can be consulted. 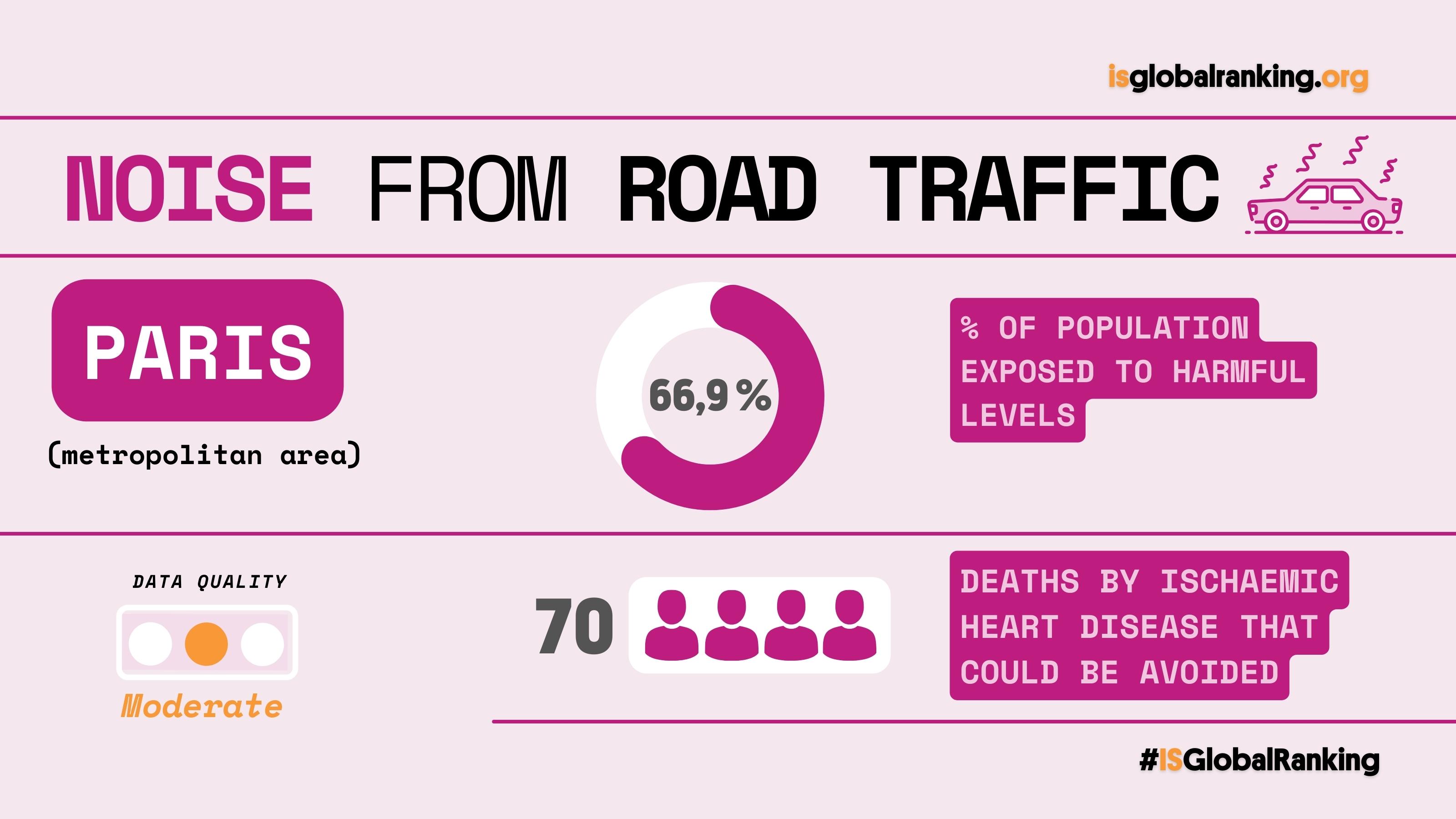 Data from some European capitals*

*Due to the heterogeneity of the available data on noise from road traffic and the lack of quality of the noise maps for many European cities, the authors consider that the results from different cities are not comparable with each other.

Rewriting the History Books: Why the Vikings Left Greenland

Indian Forest Loss ‘Worse Than Feared’ Due to Climate Change