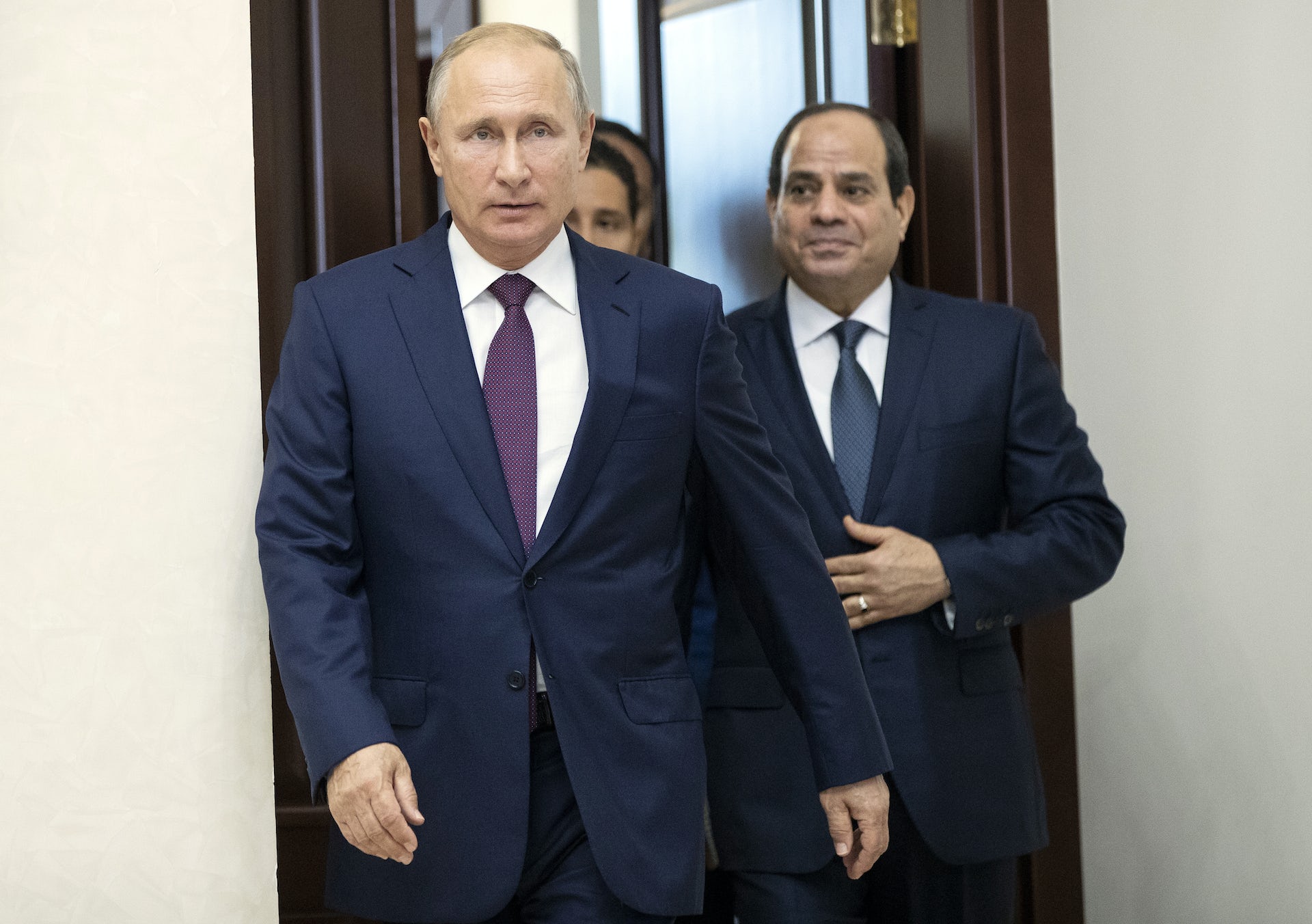 One of the oldest running daily news organizations in the Arab world, Cairo-based Al-Ahram, publishes stories from Sputnik, a propaganda arm of the Russian government.

As part of a 2015 agreement between Al-Ahram and Rossiya Segodnya, Russia’s government-owned news giant, Sputnik stories appear in Bawaba Al-Ahram, the paper’s digital site, side-by-side with reporting from legitimate news agencies such as Agence France-Presse and Reuters.

Unlike these news agencies, the Kremlin-controlled outlet posts a fair amount of fluff on Al-Ahram, such as a call by the Syrian Researchers network to “boycott” the use of makeup or news about the excavation and restoration of a former Egyptian president’s iconic 1958 Chevy.

Those articles help Al-Ahram by boosting the site’s overall online traffic. For Kremlin propagandists their mere presence achieves a major strategic objective: neutralizing the distinction between outlets like Reuters and Sputnik and leveling the playing field between journalism and fake news.

This collaboration is part of a long-running Russian campaign to build influence in Egyptian media and elsewhere around the world – including in the U.S. My research, including that in a forthcoming book, offers more information on Moscow’s efforts to counter democracy-promoting efforts in the Arab world through media. It’s part of Russia’s global campaign to bolster nationalist movements and politicians that are sympathetic to Russian interests.

The prevalence of Russian disinformation in Egypt is not as surprising as it might seem to a Western audience. Since at least 1961, Al-Ahram has served as the government mouthpiece in Egypt. Russia has long sought influence in a key Arab state.

In recent years, Russian corporate and government agencies have invested in Egypt’s military, its offshore gas reserves, its nuclear and industrial infrastructure and its educational programming.

Simultaneously, there has been a Russian information campaign that has found a sympathetic audience in the leadership of one of the Arab world’s foremost newspapers. As Al-Ahram’s managing editor said of the agreement with Sputnik: Egyptian-Russian relations are closer than ever and the new “protocol” for media cooperation “supports that relationship.”

The culture at al-Ahram echoes Russia’s state-run media culture. Reality as it appears in the pages of Al-Ahram echoes the government line. When the facts don’t fit the official story, editors may simply alter the image of reality – as in 2010 when Al-Ahram published a doctored White House press release photo showing Egyptian President Hosni Mubarak walking in front of a group of international leaders, when really he was behind them.

In 2011, when the anti-government protests known as the Arab Spring spread to Egypt, Al-Ahram began its coverage of events with Russian-style disinformation tactics, including one journalist Peter Pomerantsev called “hook and distract.”

On Jan. 25, 2011 – the day protests were scheduled to begin in Egypt – Al-Ahram’s front page featured an article about the bombing of a Coptic church in Alexandria three weeks earlier. It was a big story, but also a distracting one given what was happening that day in Cairo.

By contrast, Al-Shorouk, a prominent opposition paper in Egypt, began its coverage of protests on Jan. 25 with an article highlighting “online demonstrations” between government and opposition forces.

On Jan. 26, Al-Ahram continued the strategy of misdirection by running an article announcing that protests (“ihtijajat”) and riots (“idtirabat”) had intensified – in Beirut. The other lead stories that day were a recap of the church-bombing story and plans by the Ministry of Foreign Trade and Industry to reject a major trade agreement with the U.S.

Again in contrast, Al-Shorouk’s Jan. 26 coverage began with the headline “A volcano of rage sweeps through the streets of Cairo and explodes in Tahrir Square.”

As I observed while living and researching in Cairo at the time and document in my book, various parties from inside and outside the country worked furiously at this time to shape public opinion about the protests. Al-Ahram got a helping hand from WikiLeaks.

On Jan. 28, as news organizations around the world were preparing to cover Egypt’s “Friday of Rage,” a massive demonstration that would feature for the first time the full manpower of the Muslim Brotherhood, WikiLeaks released a string of documents from a cache of U.S. State Department cables stolen the previous year. That batch of leaks provided useful fodder for Al-Ahram’s efforts to counter popular support for the protests.

London’s Daily Telegraph, which had just signed a deal with Julian Assange to publish portions of the leaks, ran a story with the headline “America’s secret backing for rebel leaders” in Egypt. Along with the article, the Telegraph published a “confidential” memo describing a 2009 meeting in Washington at which “several opposition forces agreed to support an unwritten plan for a transition to a parliamentary democracy, involving a weakened presidency and an empowered prime minister and parliament, before the scheduled 2011 presidential elections.”

Other leaked cables in that batch revealed the allocation of millions of dollars by the U.S. State Department for “pro-democracy groups” in Egypt. As American Ambassador to Egypt Margaret Scobey told me, U.S. support for democratic activism in Egypt and elsewhere was not a secret.

Still, Al-Ahram, echoing Mubarak’s famous midnight speech to the nation on Jan. 28, published an article on Jan. 29 framing the information as evidence of a “plot.” The coverage’s content and timing appeared selected to undercut public support of the protesters, suggesting their funding and ambitions were born of U.S. interests – rather than being motivated by authentic Egyptian concerns.

WikiLeaks’ and Russian media operations continued to influence public debate in Egypt after Mubarak stepped down.

Independent numbers are hard to come by. But one recent study shows that traffic to the RT website far outpaces competing news organizations, like Al-Jazeera, Al-Arabiya or the U.S.-sponsored Al-Hurra.

And since its first story appeared on Bawaba Al-Ahram in April 2016, Sputnik has published nearly 700 articles, far more than other contributing services. These articles often push stories conducive to the Russian narrative that it’s winning the fight against terrorism in the region and countering forces of instability.

Egyptian politics are reverting to the days of dictatorship, with President Abdel-Fattah el-Sisi having just won the right to govern until 2034. This, combined with the increasing prevalence of Russian-controlled information, is likely to pull Egypt, along with Syria, Libya, the UAE, Saudia Arabia and others, deeper into the geopolitical sphere of Russia and China and farther away from the dream of democratization that was Tahrir Square.

Wave Device Could Deliver Clean Energy to Thousands of Homes