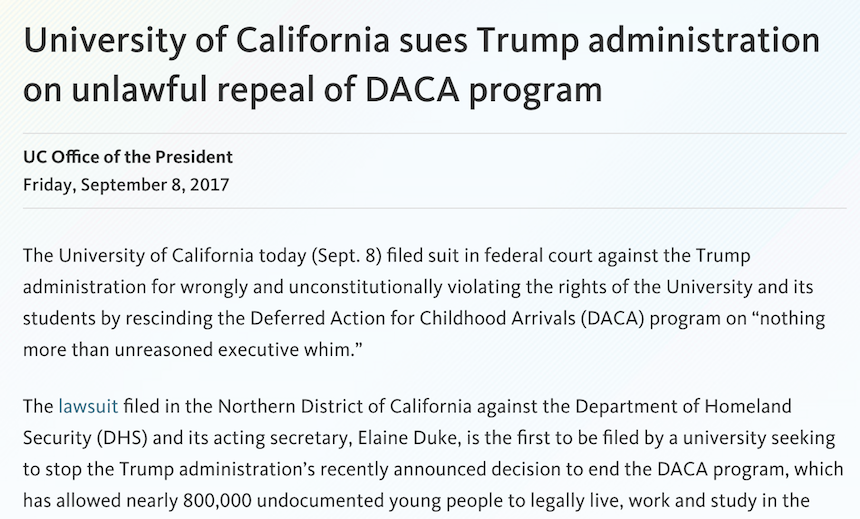 The University of California on Friday filed suit in federal court against the Trump administration for wrongly and unconstitutionally violating the rights of the University and its students by rescinding the Deferred Action for Childhood Arrivals (DACA) program on “nothing more than unreasoned executive whim.”

The lawsuit filed in the Northern District of California against the Department of Homeland Security (DHS) and its acting secretary, Elaine Duke, is the first to be filed by a university seeking to stop the Trump administration’s recently announced decision to end the DACA program, which has allowed nearly 800,000 undocumented young people to legally live, work and study in the United States.

UC President Janet Napolitano, who was secretary of DHS from 2009 to 2013, created the DACA program in 2012, setting in place a rigorous application and security review process. Applicants for DACA were only approved if they were in or had graduated from high school or college, or were in the military, or an honorably discharged veteran. They cannot have been convicted of a felony or major misdemeanor or otherwise pose a threat to national security or public safety.

“Neither I, nor the University of California, take the step of suing the federal government lightly, especially not the very agency that I led,” Napolitano said. “It is imperative, however, that we stand up for these vital members of the UC community. They represent the best of who we are — hard working, resilient and motivated high achievers. To arbitrarily and capriciously end the DACA program, which benefits our country as a whole, is not only unlawful, it is contrary to our national values and bad policy.”

The lawsuit asks the court to set aside the Trump administration’s rescission of DACA because it is “unconstitutional, unjust, and unlawful.”

“As a result of the Defendants’ actions, the Dreamers face expulsion from the only country that they call home, based on nothing more than unreasoned executive whim,” the complaint reads.

“The University faces the loss of vital members of its community, students and employees. It is hard to imagine a decision less reasoned, more damaging, or undertaken with less care. … Defendants’ capricious rescission of the DACA program violates both the procedural and substantive requirements of the APA(Administrative Procedure Act), as well as the Due Process Clause of the Fifth Amendment.”

UC says that the UC system has approximately 4,000 undocumented students, a substantial number of whom have DACA, as well as teachers, researchers and health care providers who are DACA recipients.

The lawsuit was filed with the pro bono support of the law firm Covington & Burling, LLP.

UC says that Friday’s legal action demonstrates that UC continues to take a leadership role in protecting its DACA and other undocumented students. “The university is committed to using all available resources to support the thousands of Dreamers who are currently enrolled at UC campuses, as well as other undocumented students,” UC says. Those resources and services include:

World Unprepared to Deal with the Effects of a Thermonuclear Attack