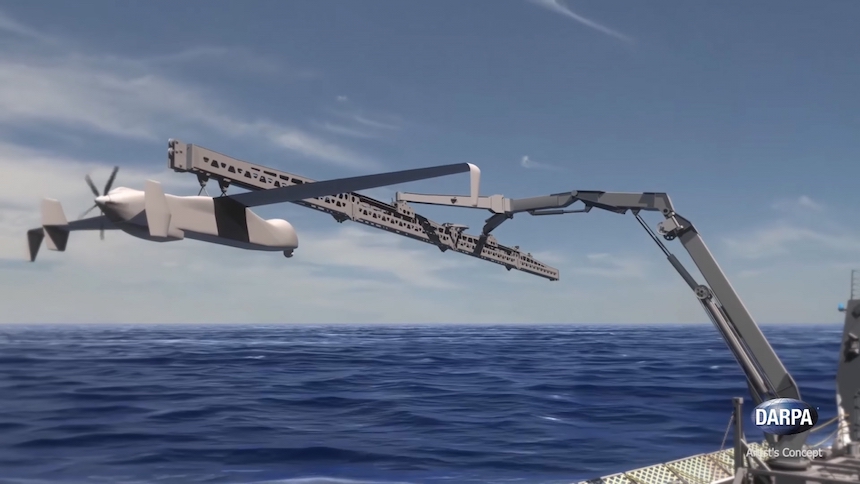 Few scenes capture the U.S. Navy’s prowess as effectively as the rapid-fire takeoff and recovery of combat jets from the deck of an aircraft carrier. The ability to carry air power anywhere in the world, and both launch those aircraft to flight speed and bring them to a stop over extremely short distances, has been essential to carriers’ decades-long dominance of naval warfare. DARPA says that to help provide similar capabilities—minus the 90,000-ton carriers—to U.S.military units around the world, DARPA’s SideArm research effort seeks to create a self-contained, portable apparatus able to horizontally launch and retrieve unmanned aerial systems (UASs) of up to 900 pounds.

SideArm fits in the footprint of a standard 20-foot shipping container for easy transport by truck, ship, rail, C-130 transport aircraft, and CH-47 heavy-lift helicopter. The small-footprint system is designed to operate in truck-mounted, ship-mounted, and standalone/fixed-site facilities. A crew of only two to four people can set up or stow the system in minutes.

SideArm owes its small size to combining its launch and capture equipment into a single rail that folds for transport. Rather than using a traditional capture method that uses a net to catch the UAS, the system snags a hook on the back of the vehicle and directs the hook to travel down the rail. This approach provides slower, more constant and controlled deceleration, which is safer for the vehicle.

“SideArm aims to replicate carriers’ capability to quickly and safely accelerate and decelerate planes through a portable, low-cost kit that is mission-flexible, independent from local infrastructure, and compatible with existing and future tactical unmanned aircraft,” said Graham Drozeski, DARPA program manager. “We’ve demonstrated a reliable capture mechanism that can go anywhere a 20-foot container can go—the DARPA-worthy challenge we had to overcome to make SideArm’s envisioned capabilities possible. We are pleased with the progress we’ve made enabling a wide variety of sea- and land-based platforms with persistent intelligence, surveillance, and reconnaissance (ISR) and strike capabilities.”

DARPA notes that SideArm is part of DARPA’s individual investment in Phase 1 research for Tern, a joint program between DARPA and the U.S. Navy’s Office of Naval Research (ONR). Now that demonstration of the capture system is complete, DARPA is working to identify potential transition partners and exploring using SideArm with other UAS platforms.