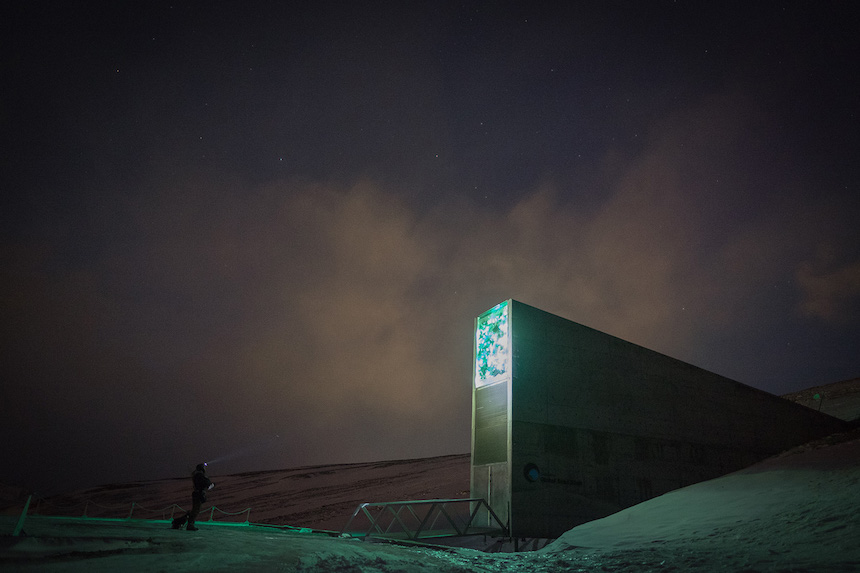 A major seed deposit critical to ensuring global food security was made to the Svalbard Global Seed Vault in the Arctic Circle today.

Despite a backdrop of geopolitical volatility, nearly 50,000 samples of seeds from seed collections in Benin, India, Pakistan, Lebanon, Morocco, the Netherlands, the United States, Mexico, Bosnia and Herzegovina, Belarus, and the United Kingdom have travelled to the vault on the Svalbard archipelago between mainland Norway and the North Pole today for long-term safekeeping.

The preparation and shipment of seeds to the facility has been funded in-part by the Crop Trust, the only organization working worldwide to create, fund, and manage an efficient and effective global system of seed collections.

Crop Trust notes that the Svalbard Global Seed Vault, the world’s largest collection of agricultural biodiversity, is a safe and secure vault supported by the Crop Trust which can store up to four and a half million samples of crops from all over the world. By preserving duplicate samples of seeds held in genebanks worldwide, the vault provides a “fail safe” insurance against loss of crop diversity caused by climate change, natural disaster or war.

Speaking from the Svalbard Global Seed Vault, Marie Haga, Executive Director of the Crop Trust commented: “Today’s seed deposit at Svalbard supported by The Crop Trust shows that despite political and economic differences in other arenas, collective efforts to conserve crop diversity and produce a global food supply for tomorrow continue to be strong. Together, the nations that have deposited their seed collections account for over a quarter of the world’s population. Nearly every country has agreed on the importance on conserving crop diversity through Target 2.5 of the United Nations Sustainable Development Goals to conserve agricultural diversity in seed collections. Crop diversity is a fundamental foundation for the end of hunger.”

To support the Crop Trust’s work at Svalbard and genebanks around the world, GoPro for a Cause, GoPro’s program dedicated to tell the stories of non-profit organizations, has launched a fundraising initiative and short documentary to help the Svalbard Seed Vault ensure ongoing crop conservation.

“We’re thrilled to support the Crop Trust’s efforts at Svalbard Seed Vault with the launch of GoPro’s short documentary that offers a unique, first-person perspective on the Svalbard Global Seed Vault and its mission. Our production team has spent more than a year filming, editing and interviewing the team, and we’re thrilled that the Crop Trust will use this film to share their story with more people.”

The Crop Trust provides funding and training for routine genebank operations, such as quality and information management. Crop Trust says that without this basic support for diverse varieties of food crops – like the ones that travel to Svalbard – the future of the world’s global food supply is at risk.

The Crop Trust’s funding allows millions of plant genetic resources to be recorded and ultimately shared and used around the world to improve agricultural production and prevent loss of crop diversity in the face of natural disasters, climate change, and war.

A case in point is the work of the International Center for Agriculture Research in the Dry Areas (ICARDA) previously located in Syria. When fighting struck Aleppo, ICARDA requested its duplicate seeds stored in Svalbard were withdrawn so it could continue its multiplication and breeding efforts in the safer locations of Morocco and Lebanon. Having successfully achieved this through the Crop Trust’s support, a portion of the seeds withdrawn in 2015 are returning to Svalbard today.

Aly Abousabaa, Director General of ICARDA, said:“Collaboration between the Norwegian Government, NordGen, the Crop Trust, CGIAR and ICARDA shows what is possible when international partners come together to find solutions to pressing regional and global challenges. We are demonstrating today that we can rely on our genebanks and their safety duplications, despite adverse circumstances, so we can get one step closer to a food secure world.”

Seed samples for some of the world’s most vital food sources like the potato, sorghum, rice, barley, chickpea, lentil, and wheat will be deposited at Svalbard in the coming days, bringing the total number of seed samples at the facility to 930,821.

A selection of supporting images of the Svalbard Global Seed Vault and the GoPro for a Causedocumentary can be found here.

To view the full GoPro short documentary and contribute to the campaign, please visit: www.gopro.com/goproforacause/croptrust

The Crop Trust is the only international organization devoted solely to ensuring the conservation and availability of crop diversity worldwide. It was initially founded by the UN FAO and Bioversity International on behalf of the global community.

Risk of Ross River Virus Could Be Next Global Epidemic