Would you be comfortable taking a nap in the driver’s seat while your fully automated car did the driving?

Queensland University of Technology (QUT) researchers in Brisbane, Australia, have released the results of two new studies that looked at drivers’ willingness to one day embrace automated vehicle technology.

Associate Professor Ioni Lewis from QUT’s Centre for Accident Research and Road Safety-Queensland (CARRS-Q) was co-chief investigator in an international study that surveyed 1563 drivers across Australia, France and Sweden about their intentions – or otherwise – to one day have a Level 4 automated car that did the driving for them.

“Under international standards, a Level 4 automated car is a high automation vehicle that can completely drive itself,” she said.

“Together with colleagues in France and Sweden, we surveyed members of the general public across the three countries and asked them about their intentions to adopt this sort of technology in the future.

“We found French drivers were more keen to embrace automated cars than drivers in Australia and Sweden.

“France has been trialling automated cars for several years and is a world leader, so we think this increased level of community exposure to these cars may have contributed to the differences in intentions found between the countries.

“We also wanted to identify the psychological reasons behind people’s intentions. In France and Sweden, people’s ‘attitude’ (their emotions and beliefs) toward these vehicles was the biggest predictor but in Australia it was ‘performance expectancy’, which reflected how much they thought a highly automated vehicle would actually assist them.

“Realistically, we are still some time away from Level 5 cars, which completely drive themselves and don’t even need a steering wheel. At the moment people can buy up to Level 2 cars – these are vehicles that still require a driver but can do some basic tasks, like braking, by themselves. But it’s important to understand driver perceptions and intentions now as we plan for the future.”

Dr. Sherrie-Anne Kaye is another QUT researcher looking at what drivers think of driverless cars and was the other chief investigator in the international survey.

She is a Research Fellow (Advanced Technologies) with CARRS-Q and also led another Queensland-specific survey.

“The Queensland study surveyed 505 drivers on what they perceived to be the advantages and disadvantages of automated cars,” she said.

“They reported quite a few advantages, including that these cars would make driving easier for elderly people and people with disabilities, reduce the human errors that contribute to crashes, and enable people to multi-task during their commutes.

“But some of the common concerns included possible technology malfunctions, hacking and privacy issues, who was legally liable, problems with mixed traffic environments (automated and non-automated vehicles) and losing the enjoyment of driving a car themselves.

“The perceived barriers to one day driving an automated car included the high cost, a lack of trust and control, safety (for themselves and others) and current legislation.”

With automated vehicle trials now getting underway in Australia, law-makers are also getting ready for the new technology.

By 2020 the NTC aims to have an end-to-end system of regulation for automated vehicles in Australia.

There are six levels, ranging from Level 0 to 5. 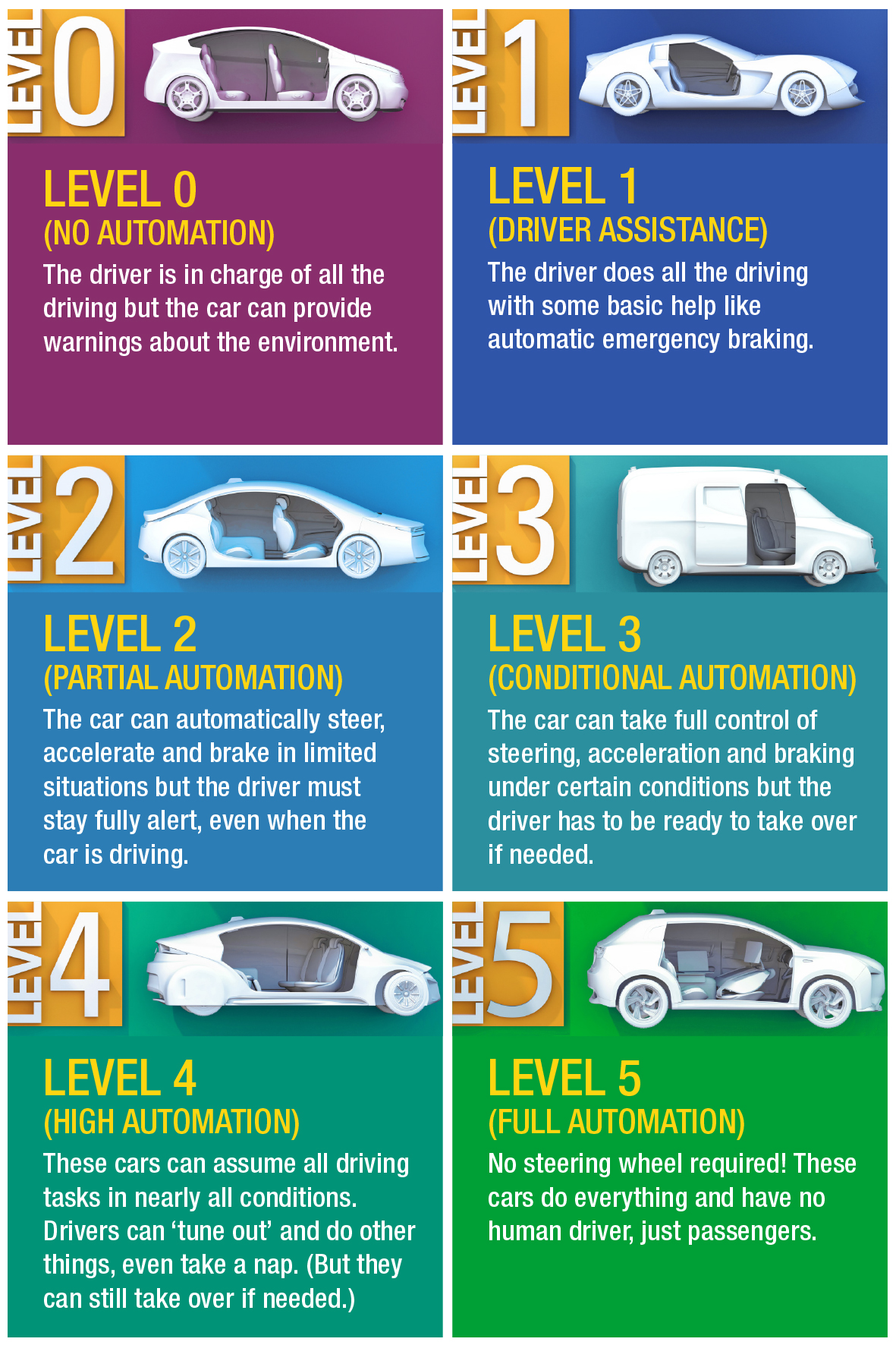