With holidays approaching, many of us are mindful of the need to collect and recycle all the additional plastic, paper and other waste that we are about to generate. This year, however, there are questions about where that waste will end up. China, the world’s largest importer of scrap, is looking to clean up its act.

In July 2017 China, which is by far the world’s largest importer and recycler of scrap metals, plastic and paper, notified the World Trade Organization that it planned to effectively ban imports of 24 types of scrap, which its environment ministry called “foreign garbage,” by the end of the year. Immediately, organizations such as the U.S.-based Institute of Scrap Recycling Industries and the Bureau of International Recycling warned that China’s action would cause job losses, shut down many U.S. recycling facilities and send more waste to landfills.

These worries are not unfounded. Global recycling markets are easily prone to disruption, and developed countries have underinvested in recycling infrastructure for years. Beijing has delayed implementation by a few months and eased its stringent new contamination limit, but its shift continues to send shock waves through the industry. Waste Dive, the must-read daily bulletin of waste-related news, named the initiative “Disruptor of the Year.” China’s action could reshape an overlooked but critical segment of the global economy: the cross-border flows of scrap that underpin recyclng markets worldwide. 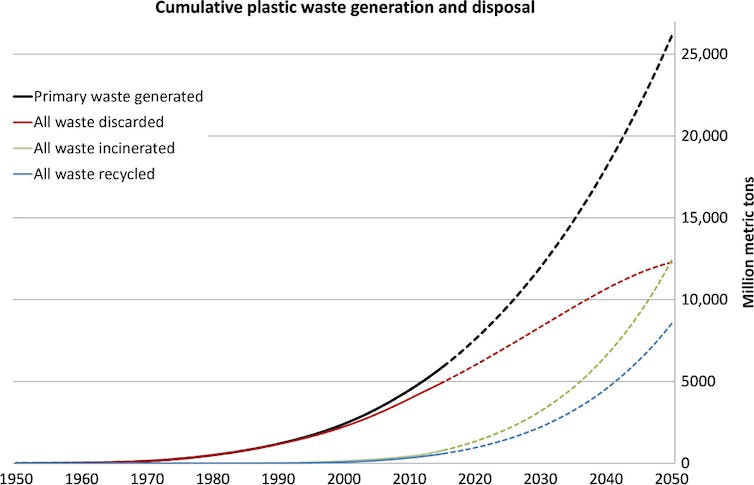 Scrap exports to China took off in the early 2000s following the lifting of broader trade restrictions. In 2012 China received nearly half of all the plastic waste that Americans sent abroad for recycling and about one-third of the European Union’s plastic waste exports. According to one 2014 study, China received 56 percent by weight of global scrap plastic exports.

This trade makes economic sense all around. Shipping is cheap: Cargo ships carry goods from China to Western countries and carry scrap back, a process known as reverse haulage. China’s booming industries are located near major ports and hungry for plastics they do not yet produce at home, so they willingly pay for high-quality imported scrap to reuse. For U.S.-based waste collectors, selling scrap to a broker to be shipped to China is cheaper than sending it to recycling facilities at home.

Plastic scrap is especially problematic. It has low economic value and is hard to recycle. It also breaks down extremely slowly in the environment, as evidenced by the buildup of plastic debris in the world’s oceans. Few are aware that up to half of the plastic waste we throw into recycling bins in Berkeley, New York or Omaha has wound up on container ships to China. 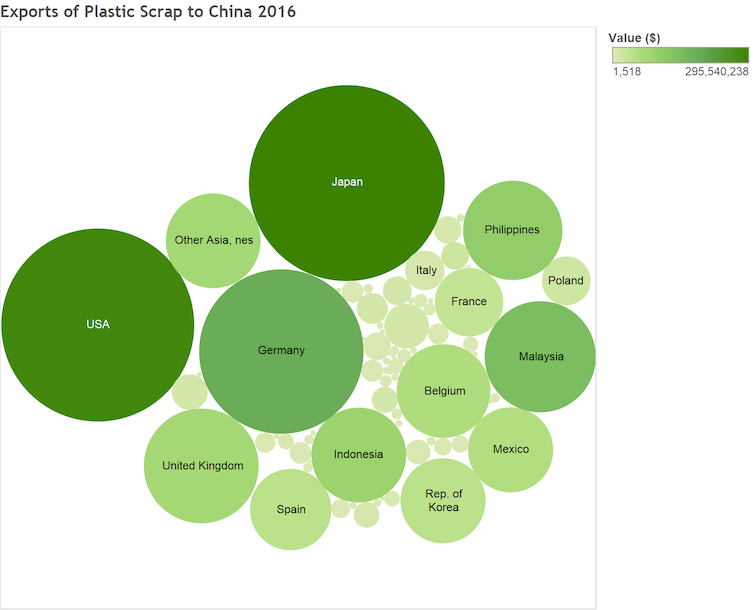 Information about the fate of plastic scrap once it gets to China is sketchy, and available statistics are inconsistent. China’s plastics recycling rate in 2013 was about 22 percent – far higher than the United States, which averages about 9 percent annually. This figure, representing around 13.6 million metric tons, includes international and domestic scrap.

Still, this means that much of the scrap plastic shipped to China is not recycled, or is recycled under hazardous conditions. Nongovernment organizations and other observers have expressed concern about how much of this imported scrap – especially if it is contaminated or low-quality – is either diverted to sub-par incinerators for energy recovery or winds up in the oceans.

To be recycled, bales of scrap should be clean, contaminant-free and sorted. Beijing has already cracked down twice on contaminated plastic and paper scrap.

Chinese leaders have very real concerns over the nation’s environmental crisis and its high-profile image as the “world’s dumpsite.” Noted filmmaker Wang Jiuliang spotlighted the scrap issue in an award-winning 2016 documentary, “Plastic China,” which focuses on an unschooled 11-year-old girl who lives and works with her family in a plastic recycling workshop. The film went viral online in China after its release, then was quickly deleted from China’s internet.

Beijing is working to replace China’s informal recycling sector with cleaner, high-tech “eco-industrial parks.” However, local authorities around entry ports strongly opposed Green Fence, which cut into local businesses’ revenues, and are likely to resist the scrap ban. China’s struggle to police clandestine imports of electronic waste suggests that it will also have trouble shutting out smuggled trash.

Some observers, such as journalist Adam Minter, think the scrap restrictions could backfire. In their view, China’s high recycling rates – up to 70 percent for scrap paper – avert deforestation, mineral extraction and fossil fuel use. Domestically produced scrap is generally of far lower quality than the “foreign garbage” that China imports, and is likely to be more polluting.

Will source nations step up?

Since July, Beijing has delayed the start date for the scrap restrictions to March 2018 and raised the maximum contamination level for plastics and other scrap from 0.3 percent to 0.5 percent – still far below normal global trade standards. Under Green Fence, authorities allowed up to 1.5 percent contamination.

Although the global scrap industry is fighting back, China’s actions are forcing industrialized nations to rethink their dependence on overseas disposal. In its 2017 infrastructure report card, the American Society of Civil Engineers criticized the U.S. solid waste industry for failing to innovate and improve recycling rates.

The United States has not built a new high-quality plastics recycling facility since 2003, and very few of its existing plants can cost-effectively process harder-to-recycle, often dirty post-consumer plastics. Europe recycles 30 percent of its plastics, compared to 9 percent in the United States, but the majority of waste plastic still winds up in landfills and in the oceans. Moves are already underway to improve U.S. capacity, but will take years to implement.

Ultimately recycling doesn’t work because of technology, values or intentions. It requires strong and stable markets for scrap and recycled goods. If China closes its scrap market, nations will divert plastics to other jurisdictions that are even less equipped to recycle and utilize it, which will send more plastics into landfills and dumps.

Mass production of bioplastics is a long-term solution, but is probably years off. For now, entities such as the Closed Loop Fund, which supports research on technologies and initiatives to build a circular economy, are working to scale up recycling infrastructure and capacity in the United States. Other priorities include expanding markets for recycled products and improving consumer education. In my view, the prospect of losing China as a consumer of Western scrap could and should finally spur industrialized nations to take more responsibility for the waste they generate.