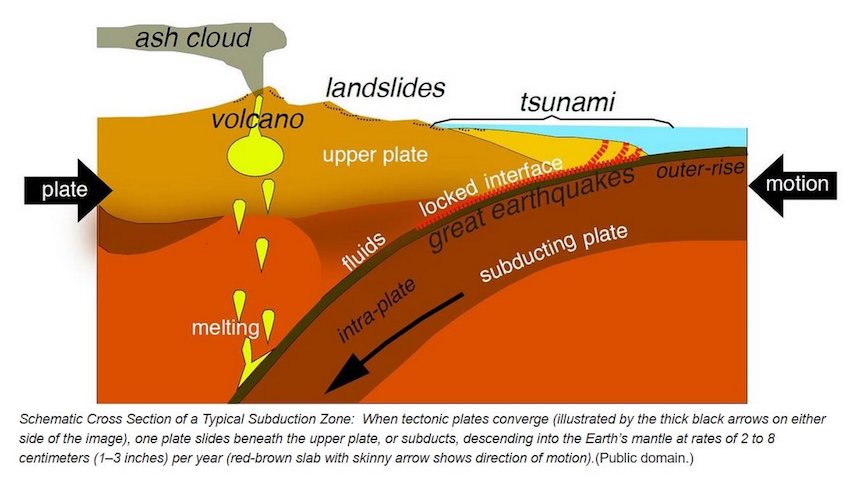 Subduction zone events pose significant threats to lives, property, economic vitality, cultural and natural resources and quality of life. The tremendous magnitudes of these events are unique to subduction zones, and they can have cascading consequences that reverberate around the globe.

The planet we live on is constantly shifting beneath our feet.  Creeping along at speeds undetectable to you and me, Earth’s massive tectonic plates are continually on the move, and nowhere is our home planet more geologically active than where these plates converge. For example, the states of Alaska, Washington, Oregon, northern California, the commonwealths of Puerto Rico and the Northern Mariana Islands and the territories of American Samoa and Guam are all situated where two tectonic plates collide, putting them at risk from the world’s largest earthquakes, powerful tsunamis, explosive volcanoes and massive landslides on land and offshore. Scientifically speaking, these areas are called “subduction zones.”

USGS says that it has developed a blueprint for advancing science and resilience from subduction zone hazards entitled Reducing Risk Where Tectonic Plates Collide – A Plan to Advance Subduction Zone Science. The new plan leverages scientific and technologic developments, improves hazard assessments, addresses stakeholder needs and maximizes capabilities through partnerships to reduce the risks posed by subduction zone events. The resulting products will inform decisions and policies that can make communities and critical infrastructure in these areas less vulnerable to subduction zone hazards.

Science to meet stakeholder needs
The new USGS plan was developed to identify the scientific advances needed by land-use planners, engineers, policy-makers, emergency managers and responders, business owners, insurance providers, the media and the public. The plan describes the scientific paths to deliver products and guide actions that would help citizens prepare for, react to and recover from subduction-zone events. These paths include:

Develop high-resolution hazard and risk assessments, allowing land-use planners, businesses and homeowners to make targeted and cost-effective decisions in advance of disaster striking, to minimize potential losses (e.g. by situating homes and critical infrastructure away from sites with the most vulnerable conditions).

Monitor offshore earthquakes and changes in the seafloor topography that indicate rapidly building stresses between colliding tectonic plates, where great earthquakes and tsunamis occur. This information would allow scientists to notify emergency managers, who can activate heightened readiness procedures.

Build earthquake early warning systemsto detect the onset of a large earthquake, estimate the intensity of shaking in nearby communities and issue an automated alert, giving residents, emergency responders and utility providers crucial seconds to prepare.

Implement multi-hazard volcano monitoring systemsthat can indicate both an eruption at a subduction zone volcano and the resulting hazards; for example, ash clouds that could impact airline traffic and lahar flows that could damage down-slope communities. In these instances, notifications would be sent to all passing air traffic, and lahar alerts would be sent to communities allowing them to evacuate.

A growing sense of urgency
Subduction zone events pose significant threats to lives, property, economic vitality, cultural and natural resources and quality of life. The tremendous magnitudes of these events are unique to subduction zones, and they can have cascading consequences that reverberate around the globe. That devastation was made shockingly evident in 2004, in the communities surrounding the Indian Ocean, and again in 2011 in Japan. Both regions were hit by magnitude 9+ earthquakes that generated huge local tsunamis, with waves over 100 feet high. Despite being the world’s most prepared nation, Japan sustained extensive flooding, 15,890 deaths and $220 billion in losses as a result of the event. In the 2004 event, more than 250,000 lives were lost.

In our Nation’s subduction zones, the probability is high that at least one major earthquake, tsunami, volcanic eruption or landslide will occur in the coming decades. These may have significant, long-term effects on economies, ecosystems, mineral and energy sources and climate. “As populations continue to increase in these zones within the United States and its territories, more people, infrastructure and economic productivity are at risk from an inevitable hazard event. This makes it imperative to focus on improving products that lead to greater resilience,” noted Bill Leith, acting Associate Director for Natural Hazards at the US Geological Survey (USGS).

The most powerful subduction zone earthquake in U.S. history, the 1964 magnitude (M) 9.2 Alaska earthquake, caused tsunamis, 129 deaths in three states and an estimated $2.38 billion in property losses (in 2017 dollars). Most deaths and damage along the Alaska coast resulted from local tsunamis caused by undersea landslides. The eruption of Mount St. Helens, in 1980, killed 57 people, damaged more than 185 miles of roads, caused the cancelation of more than 1,000 airline flights and resulted in $1.1 to $2 billion in economic losses.

Reducing risk through partnerships
Improving the application of USGS science to successfully reduce risk from subduction zone hazards will rely on partnerships among scientists and stakeholders. “To be most effective, this blueprint must be executed in collaboration with researchers from universities, other government agencies, and private industry,” said Joan Gomberg, a USGS Research Geophysicist. “There is currently tremendous momentum in the scientific community to advance our knowledge of subduction zone science knowing these hazards are lurking in our backyard — we want to leverage this energy.” The USGS plan also draws from momentum within the research community and the National Science Foundation (NSF), described in the report “The SZ4D Initiative – Understanding the Processes that Underlie Subduction Zone Hazards in 4D.” That report is the outcome of an NSF-sponsored workshop attended by 250 scientists from the U.S. and 22 foreign countries.

USGS notes that the opportunities described in the new USGS plan build on a strong foundation of existing USGS and partner capabilities, and a growing understanding of the geologic hazards associated with subduction zones. Significant gaps remain, however, in hazard monitoring and warning, risk assessment, forecasting and other loss reduction areas. Closing these gaps will require both new scientific research and the development of innovative technologies to improve accuracy and reduce uncertainty. It will take a coordinated effort involving multiple USGS programs and a breadth of partners. The work outlined in the “USGS Plan to Advance Subduction Zone Science holds promise to help individuals, communities, businesses, and Federal, State and local governments make well-informed decisions before — and when — the next subduction zone event strikes, wherever it may occur,” the agency says.

For a brief overview of the plan, check out the fact sheet Reducing risk where tectonic plates collide. ” To review the plan in its entirety, go here.