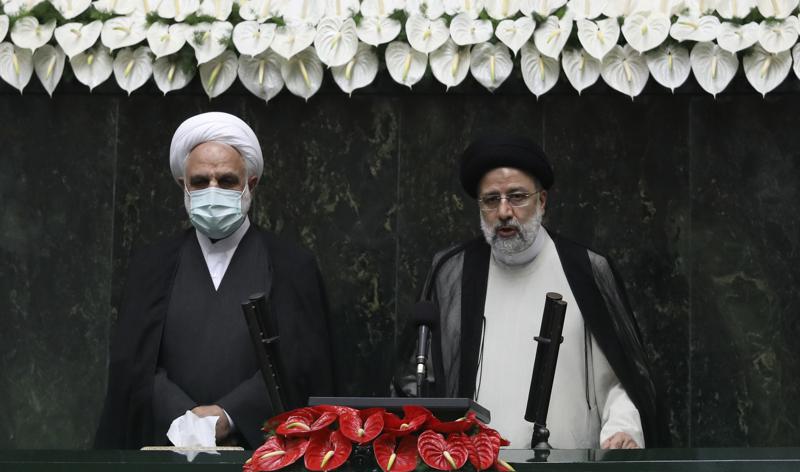 In his first phone call to a Western leader, the new president of Iran asked his French counterpart Monday to help secure Iran’s “rights” in now-stalled talks to revive Tehran’s nuclear deal with world powers.

France, alongside the U.S., Germany, Britain, Russia and China, was part of the original 2015 nuclear agreement and has played a prominent role as intermediary.

“In any negotiation, the rights of the Iranian nation should be secured and guaranteed,” he said, criticizing the U.S. for abandoning the accord and reimposing crushing sanctions under former President Donald Trump.

Even as tensions rise in the region and Tehran gradually abandons its own commitments under the nuclear deal, Raisi’s remarks signal the new administration’s willingness to return to the table. The parties to the agreement have convened in Vienna over the last several months to resuscitate the accord, which reined in Iran’s nuclear program in exchange for sanctions relief. The talks ended in June with no date set for their resumption.

Macron, for his part, called on Iran to “quickly resume negotiations in Vienna in order to get to a conclusion and put an end without delay to all the nuclear activities it is carrying out in breach of the agreement,” the French government statement said.

In the days before Raisi’s inauguration, the region saw a series of escalations, including an explosive-laden drone attack on an Israeli-linked ship off the coast of Oman that killed two crew members. The West has blamed Iran for the assault, though Tehran has denied involvement.

Speaking to Macron, Raisi emphasized that Iran “is very serious about providing security and preserving deterrence in the Persian Gulf and Sea of Oman.”

The country routinely “confronts offenders of security,” he added.

On Lebanon, France’s former colony where Iran wields great influence through its patronage of the militant Hezbollah group, Raisi thanked Paris for its support to the country during its historic financial crisis. He said Iran welcomes anything that advances “the stability, security and improvement of the economic situation of Lebanese people.”

COVID Vaccines Would Be Required for Military Under New Plan