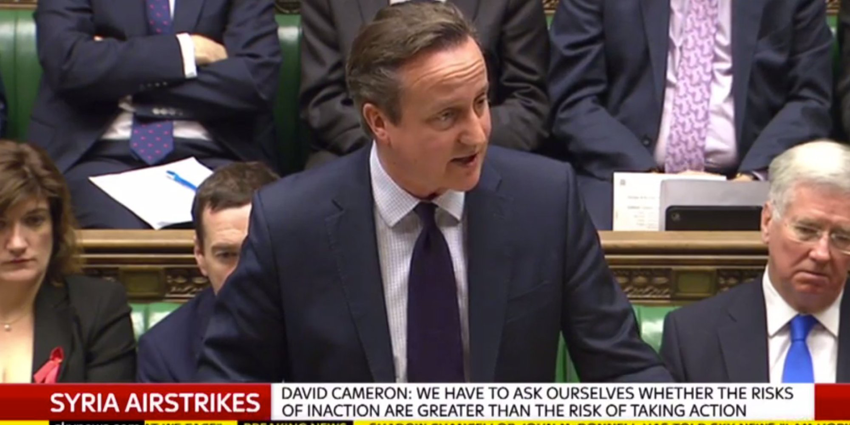 The U.K. government on Thursday released a 36-page dossier offering detailed arguments why it would be militarily, legally, and morally right for Britain to join the U.S.-led coalition in attacking ISIS targets in Syria.

The document was released ahead of Prime Minister David Cameron’s speech at the House of Commons in which he called on all House members to vote for allowing the campaign. Cameroon said that ISIS posed a “very direct threat to our country and our way of life” and that inaction by the United Kingdom posed even greater risks for the country.

Cameroon noted that Britain was already participating in the coalition’s attacks on ISIS in Iraq, and these attacks have, over the past few months, reduced the territory under ISIA control by about 30 percent. “If we won’t act now, when our friend and ally France has been struck in this way, then our friends and allies can be forgiven for asking: If not now, when?” Cameron said.

Below are the main arguments offered in the dossier, as summarized by the Independent and the Telegraph.

The threat
ISIS already poses the “one of the greatest threats to our security,” the dossier said, and bombing ISIS targets in Syria will not increase the risk to the United Kingdom because the country is already in the “top tier” ofISIS targets.

The Islamist terror group should be hit in its headquarters in Raqqa because this is where the plots for the main attacks by the group’s followers are “planned and orchestrated.”

ISIS must be denied a safe haven because “the longer ISIL is allowed to grow in Syria the greater the threat it will pose.”

The terrorist organization has a “dedicated external operations structure in Syria which is planning mass casualty attacks around the world,” the dossier said.

ISIS had been behind forty successful terror attacks around the world in the last year, including the murder of thirty British citizens in Tunisia in June.

The British police and MI5 have foiled seven ISIS plots in the United Kingdom in the last twelve months, but of the 800 British jihadists who have travelled to Syria, around half have returned home.

ISIS lures and radicalizes young people online urging them to carry out attacks in the United Kingdom.

Assad is ISIS’ recruiting agent
The dossier flatly rejects any argument that Syrian President Bashar al-Assad should be propped up by Britain as the “lesser of two evils” in Syria.

There is a “credible alternative” to both ISIS and Assad and anything else “misunderstands the causes of the problem and would make matters worse.”

“By inflicting brutal attacks against his own people, Assad has in fact acted as one of ISIL’s greatest recruiting sergeants,” the dossier says.

The dossier also claimed that senior figures in the Assad regime had been “complicit” with the terror group in profiteering in resources, including oil, wheat, and cotton.

The document said both Assad’s regime of mass murder and ISIS’s “bloodthirsty campaign” had created a “human catastrophe that had crossed the borders of Europe.”

70,000 moderate Syrian rebels
The future of Syria therefore rests with the “moderate Syrian opposition forces, who are brave enough to stand up against both of them” (the Assad regime and ISIS).

The defeat of ISIS is only possible through “partners on the ground” and Cameron ruled out British troops.

Instead, the airstrikes would relieve pressure on the 70,000-strong Syrian opposition fighters who have shown themselves capable of “retaking and holding ISIL territory” and “relieving the suffering of the civilian population” in these areas.

These opposition fighters were part of the peaceful uprising in 2011, have “fought on through four years of the regime’s brutal campaign to extinguish them,” and remain “critical” to Syria’s future.

U.S.-led coalition needs the RAF
The Coalition forces fighting ISIS in Syria need the “world leading” skills of the RAF, and it is “illogical” for the RAF to help track targets but then not “complete the task” by firing on these targets, the dossier said.

Fighter jet spy cameras which read the time on a clock tower seventy-five miles away and precision missiles that limit “collateral damage” mean Britain’s airmen and woman can play an “important and distinct role” in the fight against ISIS.

In the arsenal which would be used in Syria is the RAPTOR pod — a surveillance camera system that attaches to the Tornado aircraft — which has “no rival,” the precision Brimstone missile which “even the U.S. do not possess,” and the Reaper drones.

“Britain’s military have the experience and expertise to sustain our role in the campaign for as long as required to get the job done; few other nations can,” the document said.

Attacking ISIS would be an act of self defense
The United Nations Security Council Resolutionmade it clear that ISISrepresented a “global and unprecedented threat” and that the United Kingdom had a right in international law to “self-defense,” the dossier argues.

This is both the defense of itself and that of its allies, including France, which ISIS has also targeted, the document said.

Attacking ISIS in Syria helps in the Coalition’s collective responsibility to defend Iraq but the threat now “goes far beyond Iraq and Syria.”

“It is clear that ISIL’s campaign against the United Kingdom and our allies has reached the level of an ‘armed attack’ such that force may lawfully be used in self-defense to prevent further atrocities being committed by ISI.”

ISIL threat to the region
The broader threat ISIS poses includes Jordan, which, along with Turkey as neighbors to Syria, faces the biggest threat from ISIS.

There is a “significant threat to the stability of the region” and ISILoffshoots are spreading the conflict, the dosser warned.

Jordan is at risk from the terror group both in southern Syria and western Iraq and the United Kingdom is working with the kingdom to “ensure its resilience against” the terror group.

Political resolution
While the threat faced was “urgent,” the dossier warned “there will be no end to the chaos in which ISIL thrives and which fuels migration, for as long as the conflict in Syria endures.”

The document stressed that military action was only one element of “what is needed to defeat this appalling terrorist death cult” and that the “full answer” was in the delivery of a new Syrian government that is “genuinely representative of all the country’s people.”

It said a political solution was “finally a realistic prospect” and that Britain would use its “full diplomatic weight” to “press for the ceasefire between the regime and opposition forces proposed at the recent Vienna peace talks.”

Humanitarian response
The strategy outlined in the dossier will be backed up by Britain’s “biggest ever” response to a humanitarian crisis to “alleviate the immediate suffering” of the Syrian people.

Some £1.1 billion has been donated, the largest from any European nation, and Britain has provided almost 20 million food rations and 2.5 million medical consultations.

More than 251,000 children have been given access to education in Syria and neighboring countries and 20,000 refugees will be resettled in the United Kingdom.

War against ISIS could last “many years”
Cameron cautioned that even with airstrikes, it will still take “many years” to restore stability in Syria and that a post-conflict strategy was crucial.

“We know that peace is a process, not an event and I am clear that it can’t be achieved through a military assault on ISIS alone,” he said.

“There is a credible military strategy to defeat ISIS in Syria, as well as in Iraq. We should not expect this to happen quickly. It will require patience and persistence. But it is achievable.”

The dossier read: “Rebuilding Syria as ISIS is pushed back and after the broader conflict comes to an end will be a much more significant challenge requiring a properly resourced and coordinated response from the international community and Syria’s neighbors.

“It will require a sustained and coordinated investment from the international community over many years.”

“Preserving the institutions of the Syrian state through transition will be vital: the de-Baathification after the Iraq war (in which Saddam Hussein’s entire regime was dismantled) was a significant mistake, which we must avoid repeating.”

It added: “Building on lessons from previous conflicts, planning and preparation for helping to stabilize post-Isil Syria is a priority.”