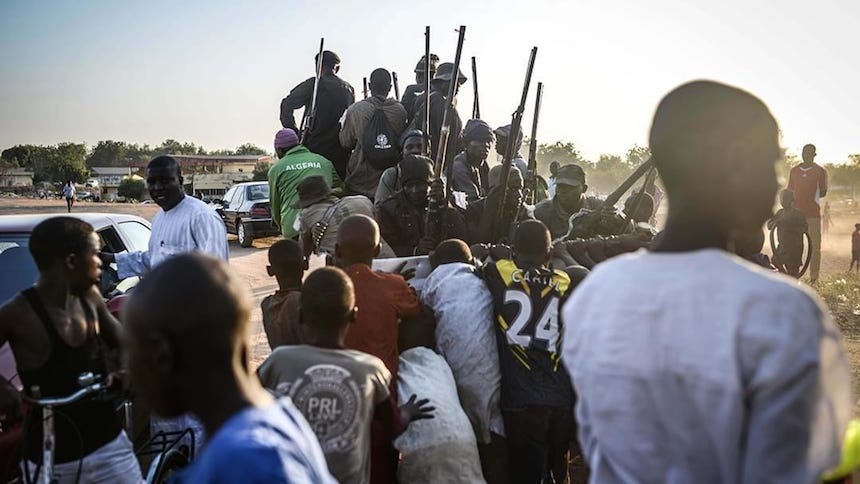 The International Crisis Group, in a letter sent to members of the UN Security Council, says that to address growing violence in Mali that is undermining the Algeria-brokered peace accord, the UN Security Council should in June renew the mandate of the Multidimensional Integrated Stabilization Mission in Mali (MINUSMA) with stronger political and civil affairs components and a greater role for the peacekeepers in local reconciliation.

Only weeks away from the official end of the two-year “interim period” defined in the June 2015 peace agreement, much of Mali remains unstable and a threat to regional stability. Implementation of the Algeria-brokered agreement consumes considerable diplomatic energy for little impact on the ground. Armed groups are more numerous, they clash more frequently with Malian and international forces, and violence has spread to Central Mali. The UN Security Council should reorient the UN’s Multidimensional Integrated Stabilization Mission in Mali (MINUSMA), whose mandate it will renew in June, to help prevent the agreement’s collapse, particularly by strengthening its political and civil affairs components and giving the mission a greater role in local reconciliation.

The challenges confronting MINUSMA have evolved since the Security Council first authorized its deployment in April 2013. The balance of power among Malian parties in the north remains in flux, generating local competition. The main rebel coalition, the Coordination des Mouvements de l’Azawad (CMA), a principal signatory to the peace agreement, has fractured; new community-based armed groups, such as the Mouvement pour le Salut de l’Azawad and the Congrès pour la Justice dans l’Azawad, have emerged. These new groups, whose strength lies in local tribal alliances, in principle are committed to respect the peace agreement but are not considered signatories and therefore struggle to secure access to peace dividends. They will remain a potential nuisance as long as they are outside the peace process; the best option would be to integrate them into one of the existing signatory coalitions.

Much of the fighting in the North is over control of trafficking routes. This hampers the peace deal’s implementation as traffickers sponsor armed groups of all stripes, including within the two coalitions – the CMA and its rival, the Platform – that signed the peace accord in Bamako. Mixed patrols as envisaged in the peace agreement, comprising Malian army, pro-government armed groups and former rebels, will struggle to curb insecurity as long as militias and key northern politicians depend on trafficking. These mixed units should have started 60 days after the signing of the peace agreement but it took eighteen months to launch the first in Gao, the Mécanisme opérationnel de Coordination (MOC), which then suffered a traumatic suicide attack on 18 January 2017 before even starting its first patrol. No other MOC has been active in other northern regions.

The state remains largely absent across the north. While its return to Kidal, currently under the control of the CMA, is symbolically important for the government, its presence in rural areas is as much a priority. Jihadist groups are consolidating control in the vacuum, in some areas providing basic public goods, like local security and conflict resolution to nomadic communities. The Malian jihadist landscape also is evolving, with a new coalition that includes al-Qaeda-linked groups competing with a small faction that has declared itself part of the Islamic State. Iyad ag-Ghaly, a former Tuareg rebel who now leads the al-Qaeda-linked coalition, has outlined his strategy as attacking international forces in cities while extending influence over a wider territory by gaining popular support. The ensuing challenge for the state is to foster “nomadic public services” across the immense and sparsely populated territory – a long-term project although one for which the government could start laying foundations.

The state’s weakness is particularly worrying in light of rising insecurity in Central Mali, a region long neglected but largely outside the peace process. Violence is rooted in local tensions among communities over resources and in the dangerous growth of self-defense militias and banditry. But a jihadist uprising also is in the making in the region of Mopti and Ségou, where militants are capitalizing on local disputes and the state’s absence and lack of legitimacy.

Though collaboration between regional and Western powers has produced results, notably the peace agreement itself, diverging interests between them is sucking oxygen from its implementation. Though MINUSMA’s diplomacy around the peace process is active and valuable, without greater international coherence it yields little concrete impact on the ground. Algeria’s leadership was invaluable in negotiating the deal but its partners perceive its role since then as less decisive. Algeria could more firmly assume its lead by establishing a permanent presence in Bamako.

Multiple forces are attempting to bring security to the north. Already, the juxtaposition of MINUSMA, the French “Barkhane” counter-terrorism operation, Malian security forces, the various armed groups – the peace agreement’s signatories and others – makes for a busy security picture. The benefits of introducing yet another force, which is envisioned to be formed by the G-5 (Burkina Faso, Chad, Mali, Mauritania and Niger) and/or the smaller G-3, comprising Burkinabe, Nigerien and Malian forces, are unclear. So too is the role either force would play; as a result, their deployment risks aggravating what amounts to a security traffic jam.

MINUSMA itself is struggling against complex threats and is now the UN’s most perilous mission worldwide. Troop increases in themselves would not be game changers. The mission will remain a target for jihadists or other armed actors whose interests it disturbs, possibly including traffickers, which will only reinforce its tendency to retreat to heavily protected forts in urban areas.

The forthcoming mandate renewal offers the Security Council an opportunity to adjust the mission’s role to these new challenges. Council members should consider the following:

1. The Security Council should task MINUSMA, the only actor in the international mediation team with a significant presence in the north, to facilitate regional reconciliation forums, potentially with one in Kidal, another in Gao and a third for Timbuktu and Taoudenit regions. These local forums would complement the Algiers process – in whose framework they would need to be incorporated – decentralize its implementation and locally consolidate any gains. Such bottom-up approaches could help calm local tensions, like the rivalry between the Tuareg Iforas and Imrad tribes in Kidal, which fuel violence. They also might contribute to fashioning local solutions to prevent the growth of radical groups in rural areas and to lowering armed violence, including when it pertains to the smuggling economy. It will be critical to reinforce the mission’s political and civil affairs components, including deploying officials with expertise in local reconciliation to Central and Northern Mali.

2. The Security Council also should reinforce MINUSMA’s good offices mandate. Strengthening relevant language in the renewal could help bolster the mission’s role in the international mediation team. In turn, that team should help develop a revised calendar for the agreement’s interim period after it officially ends, possibly extending it for a short period of time.

3. As Security Council members discuss MINUSMA’s troop numbers and equipment, they should not lose sight of the core issue: a security context that has dramatically changed since its deployment. Expelled from towns, jihadists have gone rural and extended into Central Mali. While MINUSMA’s core focus must remain political and while it cannot directly fight jihadists, it can and should help prevent their expansion by supporting the state’s presence in areas at risk – even while recognizing that the state bears primary responsibility for extending its own authority. The mission, particularly its civilian component, also should become more mobile, taking into account security constraints, and increase its presence in long neglected rural areas of North and Central Mali.

4. In Central Mali, which is already in MINUSMA’s mandate but still awaits reinforcement, the mission should learn from its experience in the north. Instead of concentrating forces in urban military camps, it should emphasize mobility and dedicate its resources to facilitating the work of its civilian components. European and other advanced force contributors should ensure that the mission fields the necessary military resources to make this possible. To increase its mobility, MINUSMA should consider reducing the size of, or even closing, some bases especially in locations in which the mission has had limited impact such as Tessalit or Ansongo. This would allow MINUSMA to reduce the force contingent currently dedicated to protecting UN facilities in fixed locations and increase the number of its mobile elements. In other words, a more robust MINUSMA need not necessarily entail additional troops, but rather better equipped and more mobile contingents.

5. The Security Council also should consider MINUSMA’s relationship to other military forces, particularly in light of potential G-5 or G-3 deployments. Given that key MINUSMA contingents are from G-5 states, discussions over respective roles among MINUSMA, the G-5 and the African Union (AU) are essential. Options will hinge on the role, strength, funding modality and composition of such a force, all of which currently are under negotiation. For now, however, the UN should work closely with the AU, which is reviewing plans for the force. This discussion is especially important as MINUSMA’s mandate renewal will take place at a time when the new U.S.administration is pressing for review of all major UNpeace operations.

A sanctions regime for Mali, which some Security Council members have proposed, should be viewed with caution. Any such regime would need to be balanced and its purpose clear. The threat of sanctions during earlier negotiations yielded little return. The fragmentation and fluidity of armed groups would complicate targeted sanctions: groups from all sides, including pro-government groups, have ties to figures in smuggling and jihadist networks. Without a green light from the Malian government, some Council members would be reluctant to approve sanctions, which would taint the regime as partial.

In this context, a visit from UN Secretary-General António Guterres to Mali would be particularly useful. It could boost the mission’s morale, serve as an opportunity to explain its revised mandate to Malian parties and help convince them that passivity of the Malian political elite and its lack of political will presently represent the greatest threats to the peace process. Such a high level visit also could encourage Boubakar Keïta, Mali’s president, to publicly demonstrate greater personal involvement in support of the peace process.

The Security Council’s renewal of MINUSMA’s mandate should reflect the fresh challenges the mission confronts and the Malian environment in which it operates. Although the Algiers peace process has stalled, neither Bamako nor the region shows much appetite for a major course correction. This limits options. But by strengthening MINUSMA’s civilian components, reinforcing its good offices role, tasking it with local reconciliation and reviewing its relationship with other security forces in Northern Mali, the Council would better position the UN to support the peace agreement’s implementation and prevent its collapse.