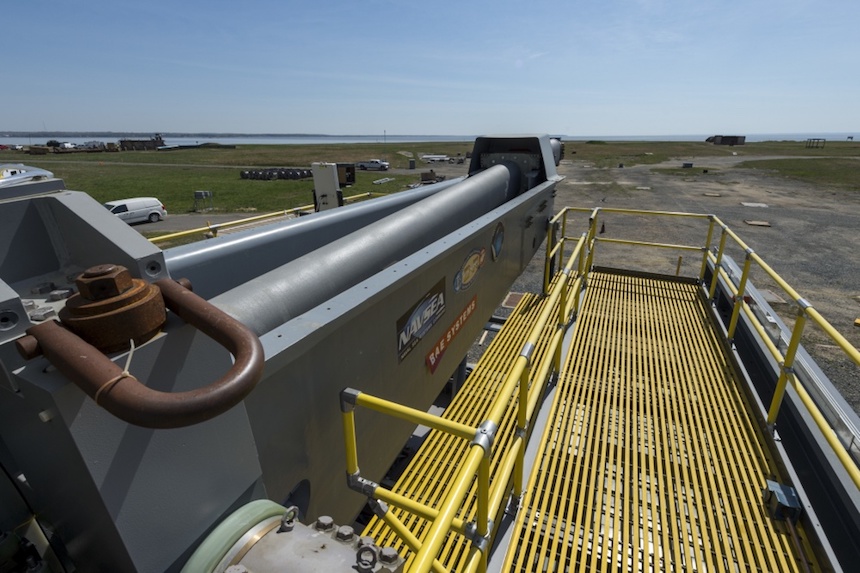 At the recent Naval Future Force Science and Technology Expo, the Office of Naval Research (ONR) announced that the Navy’s electromagnetic railgun is out of the laboratory and ready for field demonstrations at the Naval Surface Warfare Center Dahlgren Division’s new railgun Rep-Rate Test Site at Terminal Range.

Initial rep-rate fires (repetition rate of fires) of multi-shot salvos already have been successfully conducted at low muzzle energy. The next test sequence calls for safely increasing launch energy, firing rates and salvo size. Railgun rep-rate testing will be at 20 megajoules by the end of the summer and at 32 megajoules by next year. To put this in perspective, one megajoule is the equivalent of a one-ton vehicle moving at 160 miles per hour.

“Railguns and other directed-energy weapons are the future of maritime superiority,” said Dr. Thomas Beutner, head of ONR’s Naval Air Warfare and Weapons Department. “The U.S. Navy must be the first to field this leap-ahead technology and maintain the advantage over our adversaries.”

The revolutionary railgun relies on a massive electrical pulse, rather than gunpowder or other chemical propellants, to launch projectiles at distances over 100 nautical miles—and at speeds that exceed Mach 6, or six times the speed of sound. That velocity allows projectiles to rely on kinetic energy for maximum effect, and reduces the amount of high explosives needed on ships.

The railgun shoots the high-velocity projectile (HVP), a next-generation, low-drag, guided projectile that can be used in different gun systems. With its increased velocity, precision guidance and extended range, the railgun realizes the full range of the HVP’s scalable lethality. Together, both technologies will enable naval forces to address threats in the mission areas of surface fire support, anti-air and anti-surface warfare.

The Navy currently is developing and testing railgun barrels capable of firing many rounds per minute with a tactically relevant barrel life—as well as the associated power and auxiliary systems needed to make that possible. In addition, the weapon’s power system now is small enough to fit aboard current and future U.S. Navy ships. These products, when matured, will create much more capable warships.

The railgun is expected to be very cost-effective, while adding offensive and defensive depth. Compared to traditional guns on Navy ships, the railgun offers greater range, higher velocity and a deeper magazine.

“The railgun will be an effective deterrent against growing and increasingly complex threats,” said Beutner. “Its power level surpasses traditional gun technology, and it reduces explosive ship-board risks to Sailors and Marines at sea.”

Watch a video of the electromagnetic railgun.