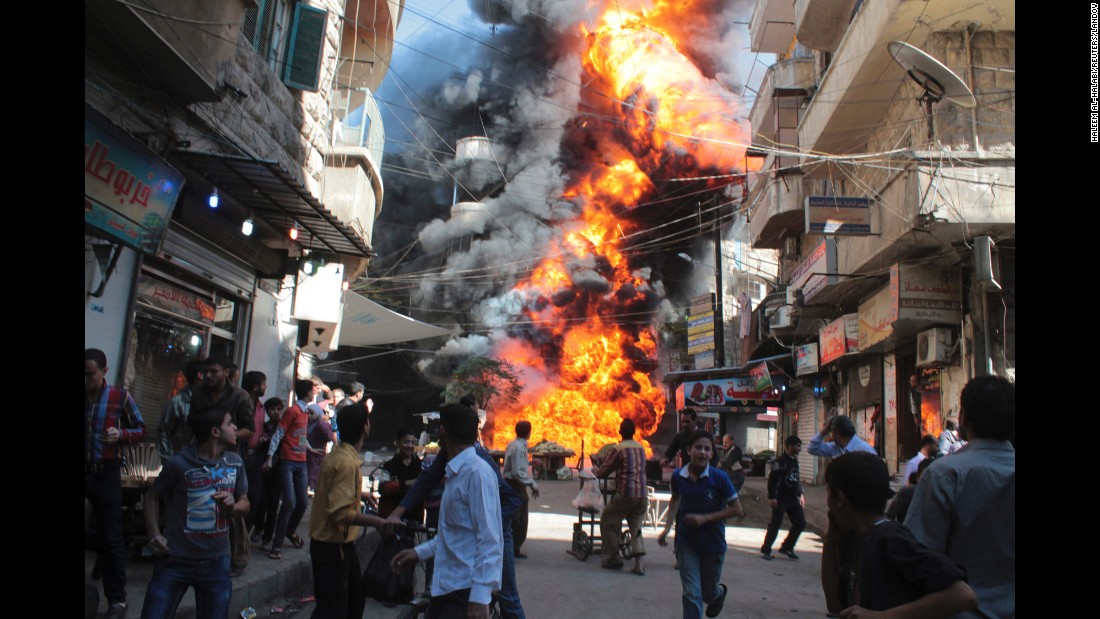 • On April 7, 2018, dozens of civilians were injured or killed in a suspected chemical weapons attack by the Syrian regime in Douma, Syria.

• President Trump pointedly blamed Russian President Putin for allowing the attack, saying there would be a ‘big price to pay.’

• Russia and Syria’s Assad regime, along with their supporters, deny any attack or claim it was a ‘false-flag’ to justify military intervention in Syria.

• On April 11, President Trump tweeted that he will not back down despite Russian vows to shoot down any missiles fired into Syria.

The Syrian civil war has been, from the beginning, barbaric against the civilian population. The war is a local catastrophe, having killed some 450,000 people, and also an intensely complicated regional and international crisis. The April 7 chemical weapons attack against civilians in the rebel-held area of Douma, which is encircled by Assad regime forces, is unusual only because of international reaction. That reaction included a rare public criticism of Russian President Putin by United States President Trump on Twitter. The attack killed dozens of civilians, including children. Since 2012, there have been hundreds of attacks reported, including attacks with mustard gas, sarin nerve agent, and chlorine.

Roughly one year ago, on April 6, 2017, the United States launched 59 cruise missiles at the Al Shayrat airfield in Syria in response to a regime chemical attack that killed at least 80 civilians. Announcing the U.S. strike, President Trump stated that his approach would deter Assad from using chemical weapons. He said that ‘years of previous attempts at changing Assad’s behavior have all failed, and failed very dramatically.’ Despite the headlines lauding tough deterrence and the enforcement of redlines, there have been dozens of reported chemical attacks since then, with this latest in Douma simply being the most high-profile. Chemical weapons are commonly used by the Assad regime to terrorize and de-populate rebel-held areas.

President Trump vowed that the regime would pay a ‘big price’ for this attack, calling the Syrian president ‘Animal Assad.’ It remains unclear how the U.S. will respond, given that previous targeted airstrikes have been shown not to deter the systemic use of chemical weapons by the Assad regime. Russia has both denied there was a chemical attack—saying its personnel did not find ‘any trace of chlorine or any other chemical substance used against civilians’ in Douma—and that if there were such an attack, it was perpetrated by the rebels as a false flag operation aimed at generating international pressure to remove Assad. Russian troops are co-located in some bases with regime forces, and any U.S. strike that kills Russian troops would lead to a rapid and serious escalation between Moscow and Washington.

The situation in Syria is so complicated by regional intrigue and posturing that the April 9 airstrikes against the central Syrian military base known as T-4 was initially reported as a likely U.S. strike and then changed to a probable Israeli strike. Both Russia and Syria now say that Israel was behind the raid, with the Russian Defense Ministry claiming Israel used two F-15 fighters from over Lebanese airspace to conduct the surprise attack on T-4. Israel has not responded publicly to the reports but has previously acknowledged hitting T-4 in a February 2018 strike.

The U.S. stance on Syria remains as chaotic as the overall conflict. President Trump has clearly stated he wants the U.S. to leave Syria and ‘let the other people take care of it now’ while the Department of Defense says nothing has changed. The U.S. military appears to be settling in for a relatively extended stay in the Manbij area of northern Syria, while its statements about the fight against the so-called Islamic State vary weekly between being essentially won, or facing a long road ahead. As the fight against the Islamic State continues to morph into the larger fight over influence-building and geopolitical-blocking maneuvers, the Syrian war will continue and more Syrian civilians will suffer.

-This brief was originally published by The Soufan Group