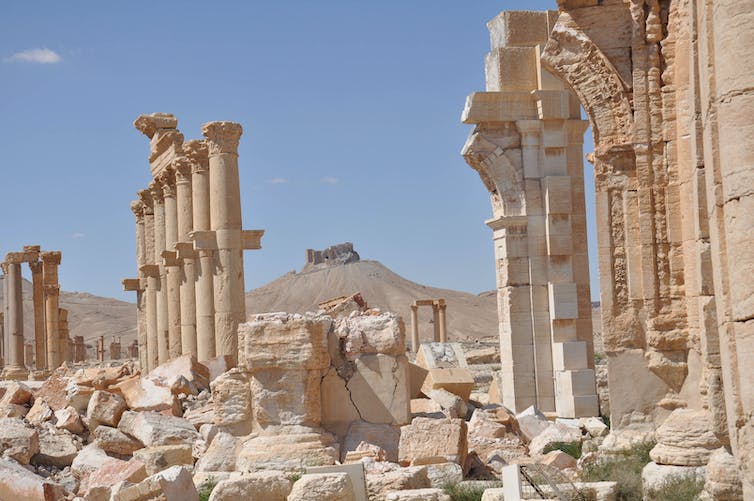 Pictures of the destruction of the UNESCO World Heritage site of Palmyra have become iconic images of the conflict in Syria. These have been widely shared around the world as symbols of Islamic State’s barbarism – profiled alongside their extensive human rights violations, such as the massacre of the Yazidi people.

But new research from the universities of Newcastle and Milan, published in Antiquity, suggests the destruction also received some support from the Arabic-speaking public.

IS is not the first group to purposefully destroy heritage. The Taliban’s destruction of the Bamiyan Buddhas in Afghanistan also shocked the world. but IS’s “socially mediated terrorism” has far-reaching impacts.

We wanted to understand what the Arabic-speaking world had to say about the issue, so we used “sentiment analysis”. This is a technique that involves categorising opinions in statements into whether they are positive, negative, or neutral, as well as categorising the reasons expressed to support such sentiments and then analysing the results. Categorisations are usually done manually to catch sarcasm and idioms, but our method allowed us to automatically and accurately analyse 1.5m publicly available Arabic-language tweets explicitly discussing the topic over nine months.

Our study included widely shared reports of destruction – such as news stories, photographs and videos circulated on social media – as well as incidents that have only been discovered by analysis of satellite imagery. We also included instances of IS’s demolition for construction purposes, and the repurposing of sites (such as turning a church into police headquarters), as we assumed all of these would affect sentiment towards the extremist group.

In general, our research found that a fifth (21.7%) of tweets that expressed an opinion about these IS abuses of heritage actually supported it. Given the widespread Western media coverage of Palmyra, the team then decided to focus specifically on its impact in our study.

We took a subset of our data containing sentiments about attacks to archaeological sites and analysed the amount of positive sentiment. Then we ran the analysis again without Palmyra, to see whether it made any difference to the way people considered IS’s damage. Was there a greater amount of support (positive sentiment) for the destruction Palmyra compared with other archaeological sites?

Below is an example of one such tweet we found with sentiments about the destruction of Palmyra:

“The lions of the Islamic State are blowing up the temple (Temple of Baalshamin) in the city of Palmyra, and eventually by God’s will they will blow up the pyramids and the Sphinx”

Our study period ran from August 1 2015 to June 30 2016. Before it, in May 2015, the Islamic State took control of the town of Tadmur and the adjacent archaeological site of Palmyra. IS then used the ancient theatre for mass executions, destroyed the Al-Lat goddess statue, and mined the site.

Within our study period, IS destroyed the Temples of Bel and Baalshamin in August 2015. In October 2015, they destroyed the Arch of Triumph, and then three columns by tying men to them and detonating explosives. Satellite imagery revealed that 11 Tower Tombs were destroyed with explosives. IS also beheaded Khalad al-Assad, the former head of Palmyra Antiquities.

After the study period, we learned Palmyra’s museum had been heavily vandalised, and IS’s second occupation of Palmyra (December 2016 to March 2017) involved additional destruction.

As you might expect, given its prominence as a World Heritage site, the amount of online discussion increased when attacks on Palmyra were reported – but the overall levels of positive and negative sentiment were unaffected. Reports of Palmyra’s destruction did not attract more support than reports of attacks on other archaeological sites – but the destruction didn’t significantly lessen support for IS, either.

However, it did drastically increase coverage of IS’s actions. In that sense, the destruction at Palmyra was a successful propaganda coup. It could even have contributed to the support for recruitment seen in some tweets. When the reasons for expressing positive and negative sentiments about IS attacks on heritage were categorised, a fifth (21.5%) of the positive tweets related to what we termed as “recruit through the broadcasting of their ideology” – the third-largest category of reasons for support.

Yet, while IS appear highly strategic in their social media actions, the strategy is not coherent or consistently followed. The destruction of the temples was featured in Dabiq 9 (IS’s English-language magazine), and a photograph of al Asaad’s body and a video of the museum damage was released on their social media channels. These were the only events claimed by IS. Other events – including those from their second occupation – were reported by journalists or discovered via satellite imagery analysis, suggesting that IS was not always prompt to capitalise on its destruction of Palmyra.

Although Western media has focused on Palmyra, the most common category of support (34.5%) for heritage attacks from our analysis related to perceived humiliation of targeted local communities by IS, rather than relating to a specific site or type of site. The highest levels of dislike came not from Palmyra, but from the destruction of Islamic sites and cemetery attacks.

So if we want to protect these important sites it’s important to move beyond the buildings to engage with the communities that have been targeted. Focusing simply on Palmyra’s antiquities fails to see the people behind the heritage – or to understand why they are threatened. And we now know that this understanding is essential to counter a threat that affects not only heritage sites but the social cohesion of the region that created them. As other groups begin to copy IS’s strategies – for example in Yemen where bombing has destroyed many antiquities – this issue can only become more urgent.