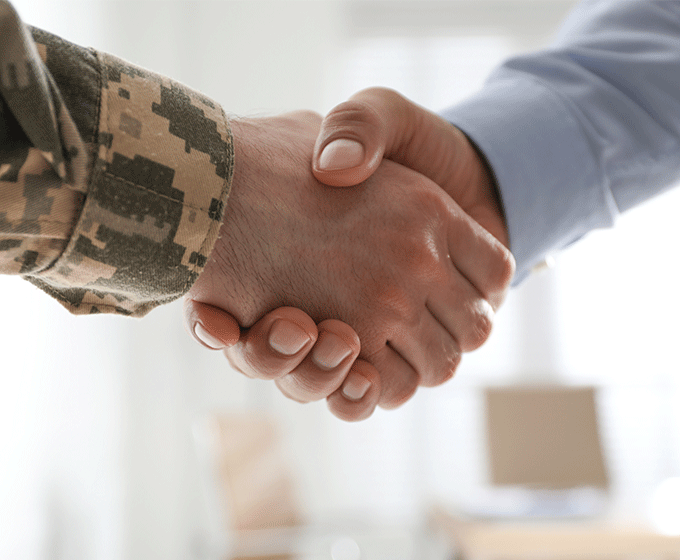 A UTSA management professor and his students have partnered with a Marine Corps combat veteran to shed light on the need for new veterans programs in the post-9/11 world, especially those that create a strong sense of community for vets.

Bruce Stanfill, an associate professor in the UTSA Carlos Alvarez College of Business’ Department of Management, met Chris Hoffmann, a Marine Corps combat veteran and founder of the Ambitious VET Network, and knew immediately that there was an opportunity for his students to have a bold impact on a significant, real-world problem while gaining valuable career experience.

Together, Stanfill and Hoffman sketched a study framework to examine where and how veterans transitioning from military service to civilian life were thriving, threading water or struggling. What the researchers found was a strong link between community support and a fulfilling life after military service.

“Humans are social creatures. Regardless of systemic support programs, when we don’t have social support, we are really missing something important,” Stanfill said.

Hoffman and The Ambitious VET Network published the findings in the white paper, Project Introducing a New Generation of Military Veterans to the Marketplace.

Hoffmann stated that veterans lacking a purpose and meaning in their lives experience difficulty at the three-year point, when most job support services end. He believes that there are common causes of why some veterans struggle in their search for life satisfaction, but he needed help analyzing the complex data he had collected through interviews.

Using principles of data analytics applied to Hoffman’s qualitative data set, Stanfill, who is a former Navy officer, and graduate students from his Organizational Behavior and Management course were able to help with Hoffman’s research. An added benefit for the students was the hands-on learning experience in dealing with uncertainty and change in group projects as they select, plan and execute. The students worked in concert with veterans, others with military connections and nonprofit organizations, to analyse this real-world problem.

“This Ambitious VET project provided UTSA students with an invaluable opportunity for experiential learning while addressing the grand challenge of understanding and helping veterans with their transition into society after leaving the military,” said Stanfill. “It also gave students a great learning opportunity in performing complex strategic analysis.”

While most project teams are fully autonomous, Stanfill guided this team using Parmenides EIDOS, an innovative software for complex decision making, strategic reasoning and problem solving. In the first six-week phase of the project, the UTSA students used the software to identify and visually connect factors leading to success versus struggle, as described in more than 300 qualitative surveys.

In the second phase of the data analysis, the students linked the factors that influenced a veteran’s decision making. The result identified four key scenarios related to veterans who continued to struggle in their post-military career.

The students found that veterans who struggled during their military career or felt indifferent toward their military experience did not have a positive transition to post-military life. Those without a personal support network struggled even more, feeling isolated or alone, which impacted their ability to find and/or hold onto a job.

On the other hand, the study demonstrated that veterans with good emotional support and above average emotional intelligence (being able to manage their feelings and understand the needs of others), generally provided fulfillment in life and a successful post-military career.

“As a recent Navy retiree with three combat deployments, I myself struggled to find employment in my field of specialty due to the disparity in skillsets required in the military versus what my counterparts in the civilian sector are focused on. Our research provided the mechanism that the Ambitious VET needed to prove and support their premise that veterans need more assistance than has traditionally been considered.”

The findings of the research demonstrate that emotional intelligence and a strong social network plays a very important role in the transition from military to civilian life.

Stanfill added, “People who don’t have a purpose are unlikely to succeed, and much of the systemic support is focused on addressing this by finding a job that connects to their skills.”

Smartphone Evidence on Human Rights Abuse in the Age of Deepfakes