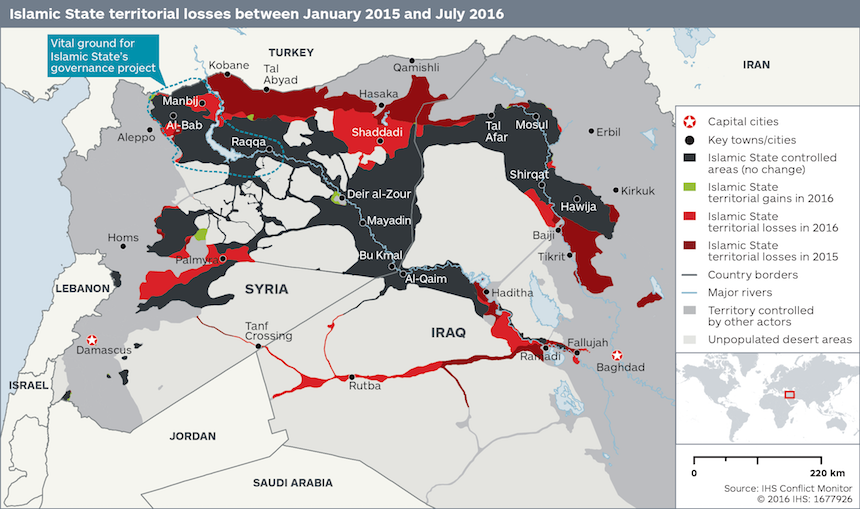 Islamic State’s income has more than halved since 2014, due to its shrinking territory in Syria and Iraq and subsequent losses of significant sources of revenue, according to a collaborative new study by the International Centre for the Study of Radicalization (ICSR) at King’s College London and EY.

Whilst it is impossible to say exactly how much money Islamic State has at its disposal, findings show that the most significant sources of revenue are closely tied to the territory it controls. Most recent evidence suggests that total income from taxes/extortion, oil, kidnapping, antiquities, looting, and confiscations has decreased from up to $2 billion in 2014 to less than $800 million in 2016. There is also no evidence that the group has been successful in creating new sources of revenue.

As well as shrinking territory, the researchers suggest that ISIS’s economic model has relied heavily on “relentless” territorial expansion to fine populations and seize assets. The report cites ISISinternal documents which suggest that $3.7m was raised in one month in 2015 through confiscations in Syria’s Deir ez-Zor province but since then, these non-renewable revenue sources appear to make up an increasingly small proportion of its finances.

The report also highlights the significance of the ongoing battle to reclaim Mosul from Islamic State. In addition to constituting a military and symbolic defeat, losing control of the city would have large financial repercussions for Islamic State. The Iraqi city is the commercial capital of its proto-state. As a result, the report suggests that if Mosul is re-taken in its entirety, it will likely be a water-shed moment in Islamic State’s financial prospects.

Subsequent action by The Global Coalition to Counter ISIL, such as the launch of Operation Tidal Wave II in October of 2015, has also been pivotal in destroying the infrastructure and key transportation systems integral to the Islamic State’s financial fortunes.

John Holland-McCowan, Ph.D. Candidate in the Department of War Studies at King’s and Research Fellow at ICSR, led the research and said: ‘We have reason to believe that re-capturing territory from the Islamic State is having a dramatic impact on its financial situation. However, the group and its predecessor, Al-Qaeda in Iraq, have demonstrated an ability to operate under much tighter financial constraints. As a result, these declining figures do not mean that they will be unable to carry out terrorist attacks outside, or within, their territory in the future.’

Professor Peter Neumann, Director of ICSR, said: “It is very difficult to accurately quantify Islamic State’s financial situation but terrorist operations are often cheap and funded on an ad hoc basis. There is good reason to believe that financial revenue will continue to decline as territorial progress is made and the loss of Mosul may come to be particularly significant. Whilst this is evidence that efforts to combat such streams of revenue are succeeding, it is far too early to declare victory.”

Dr. Stefan Heissner, Managing Partner of the EY Fraud Investigation & Dispute Services practice in Central Europe, said: “It is essential that both governments and the private sector have an in-depth understanding of the way the Islamic State finances itself. Based on this knowledge, they can work on reducing or stopping the sources of income. A close monitoring or blocking of specific financial transactions, as well as thorough due diligence on business partners should be important elements of the effort to degrade the Islamic State’s finances.”

Another recent paper published by the ICSR translated and analysed a 55-page document compiled and published by the Islamic State in 2016, which offered a unique window into the mind-set of Abu Bakr al-Baghdadi’s propagandists. The document showed evidence of a coherent narrative that is, at once, positive and alternative with the mainstream media considered an effective weapon by the Islamic State.

Key findings
—- Estimates vary widely. It remains impossible to say exactly how much money Islamic State has at its disposal.

—- The group’s most significant sources of revenue are closely tied to its territory. They are: (1) taxes and fees; (2) oil; and (3) looting, confiscations, and fines. We have found no hard evidence that foreign donations continue to be significant. Similarly, revenues from the sale of antiquities and kidnap for ransom, while difficult to quantify, are unlikely to have been major sources of income.

—- In the years since 2014, Islamic State’s annual revenue has more than halved: from up to $1.9b in 2014 to a maximum of $870m in 2016. There are no signs yet that the group has created significant new funding streams that would make up for recent losses. With current trends continuing, the Islamic State’s “business model” will soon fail.

Assessment
—- Evaluating Islamic State finances through traditional approaches towards “countering terrorist finance” leads to serious misconceptions. Islamic State is fundamentally different because of the large territory it controls and the unique opportunities this offers for generating income.

—- Conversely, its reliance on population and territory helps to explain the group’s current financial troubles. According to figures provided by the Global Coalition, by November 2016 Islamic State had lost 62 percent of its mid-2014 “peak” territory in Iraq, and 30 percent in Syria. From a revenue perspective, this means fewer people and businesses to tax and less control over natural resources such as oil fields.

Prospects
—- There are good reasons to believe that Islamic State revenues will further decline. In particular, capturing Mosul, the Caliphate’s “commercial capital”, will have a significant detrimental effect on

—- Nevertheless, Islamic State, and its Al-Qaeda in Iraq (AQI) predecessor, have repeatedly demonstrated that financial and military setbacks can be overcome.

—- Moreover, the decline in revenues may not have an immediate effect on the group’s ability to carry out terrorist attacks outside its territory. While hurting Islamic State finances puts pressure on the organization and its state-building project, wider efforts will continue to be necessary to ultimately defeat it.

Increase in Arms Transfers Driven by Demand in the Middle East, Asia