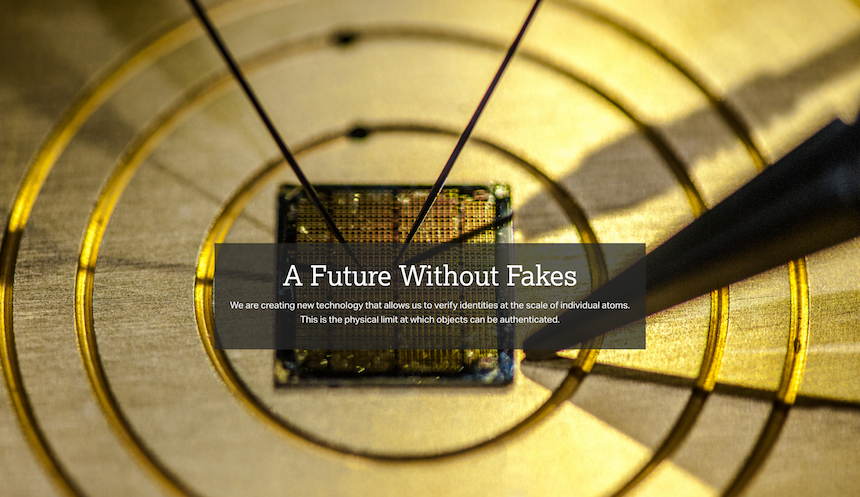 Every year, imports of counterfeited and pirated goods around the world cost nearly $0.5 trillion in lost revenue.

Counterfeit medicines alone cost the industry over $200 billion every year. They are also dangerous to our health – around a third contain no active ingredients, resulting in a million deaths a year.

And as the Internet of Things expands, there is the need to trust the identity of smart systems, such as the brake system components within connected and driverless cars.

But researchers exhibiting at the Royal Society Summer Science Exhibition (watch video) believe we are on the verge of a future without fakes thanks to new quantum technology.

The Summer Science Exhibition opened is being held in London from 4 to 9 July.

Whether aerospace parts or luxury goods, the researchers say the new technology will make counterfeiting impossible.

Scientists have created unique atomic-scale ID’s based on the irregularities found in 2D materials like graphene.

On an atomic scale, quantum physics amplifies these irregularities, making it possible to ‘fingerprint’ them in simple electronic devices and optical tags.

Lancaster says that the team from Lancaster University and spin-out company Quantum Base are showing their new patent in optical technology, which reads these imperfections, at the “Future without Fakes” exhibit at the Summer Science Exhibition 2017.

For the first time, the team is showcasing this new technology via a smartphone app which can read whether a product is real or fake, and enable people to check the authenticity of a product through their smartphones.

The customer will be able to scan the optical tag on a product with a smartphone, which will match the 2D tag with the manufacturer’s database.

This has the potential to eradicate product counterfeiting and forgery of digital identities, two of the costliest crimes in the world today.

This patented technology and the related application can be expected to be available to the public in the first half of 2018, and it has the potential to fit on any surface or any product, so all global markets may be addressed.

Professor Robert Young of Lancaster University, world leading expert in quantum information and Chief scientist at Quantum Base says: “It is wonderful to be on the front line, using scientific discovery in such a positive way to wage war on a global epidemic such as counterfeiting, which ultimately costs both lives and livelihoods alike”.

The new invention was made possible through pioneering work on the thinnest, strongest and versatile material, graphene which was awarded the Noble Prize in 2010.

Materials like graphene are one-atom thick (so called 2D materials). They can emit light that can be measured with a camera.

When light is shone on the 2D material, tiny imperfections shine causing the material to emit light. This glow can be measured as a signal, unique only to that small section of material. The signal can then be turned into a number sequence which acts as a digital fingerprint. The small flakes which are invisible to the human eye and 1/1000th of a human hair can then be added to everyday items such as money, credit cards, passports and gig tickets. A smartphone app can then read a photo to tell the unique signal from the flakes and detect whether the product is genuine or fake through the right fingerprint or wrong fingerprint.

Due to the materials used, the small tags could be edible and coated onto medicines. At the moment HIV drugs in Africa have widespread counterfeiting issues which cost the industry billions each year and, more significantly, human lives. Coating the drugs and packaging would enable verification of the supply chain and allowing the patient to check that the medicines they’re taking are genuine products by scanning the tablet with their smartphone.

Compared with other anti-counterfeiting goods, such as holograms, security inks and taggants, the miniscule graphene identity tags are completely unique, have a track and trace ability and could be turned off at any point which could be used if a batch of products are stolen or lost at any point in the supply chain.

Lancaster notes that at the Royal Society’s Summer Science Exhibition:

— The phone app is available for the public to try.

— Examples of counterfeit items such as Premiership football and Six Nations rugby merchandise, and fake labels from counterfeit General Motors car parts are on show

— Visitors are able to challenge the scientists by attempting to replicate their experiments and discover how difficult it is to clone their technology by building their own ball and stick model of an imperfect graphene sheet.

New Technique Detects Radioactive Material Even After It Is Gone