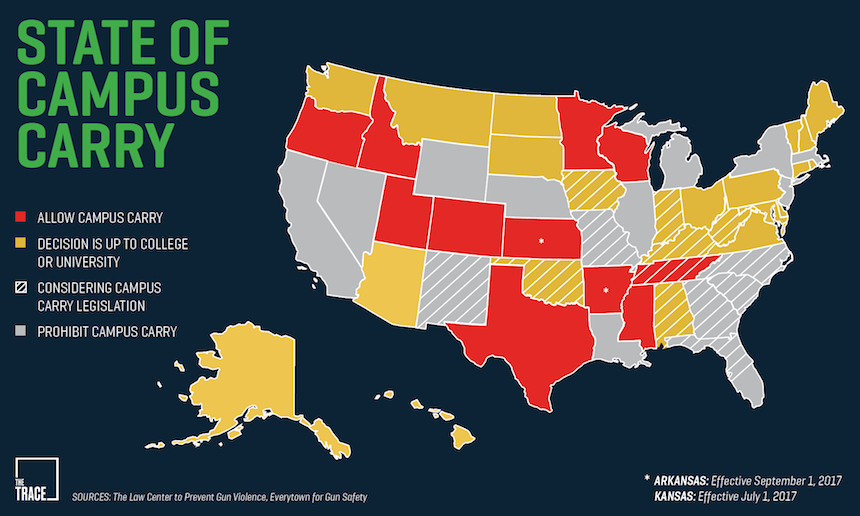 A community college instructor in Texas recently started off the academic year by wearing a bulletproof vest and army helmet to class. He did this to protest a law that, starting this August, authorizes individuals to carry concealed handguns at public community colleges in Texas. In 2016, the same law had already allowed guns at four-year institutions.

Texas and 10 other states now have laws permitting concealed carry of guns at colleges and universities. So far in 2017, campus carry bills have been introduced in at least 16 other states.

As scholars of higher education law, we have both been following campus carry legislation quite closely. Kerry published an analysis of campus carry laws and policies and Neal has worked with an advocacy group that opposes guns on campus.

While state laws and campus policies vary widely across the U.S., our view is that colleges and universities should not be forced to allow guns on their campuses – particularly in a political climate that has seen violence at dozens of colleges across the country.

Why do people want guns on campus?

One key argument in favor of campus carry laws comes from the idea that arming students and faculty will protect the community in the case of a violent incident, such as the deadly mass shooting at Virginia Tech University in 2007.

This campaign is also part of a larger effort – led by the National Rifle Association – to expand rights for individuals to carry guns in public places, including at colleges and universities.

In 2004, such sentiments helped propel Utah to become the first state to allow guns on campus. Utah Republican State Sen. Michael Waddoups explained his support of the law: “If government can’t protect you, you should have the right to protect yourself.”

Since Utah passed its law, other states have followed, with legislative interest picking up notably in the last five years. In May of 2017, Georgia joined the ranks as the 11th state to allow some form of concealed carry on public campuses. Chris Cox, executive director of the lobbying arm of the NRA, is at the forefront of the organization’s efforts to allow guns on college campuses.
AP Photo/Mark Humphrey

Though Arkansas, Colorado, Georgia, Idaho, Kansas, Mississippi, Oregon, Tennessee, Texas, Utah and Wisconsin all have campus carry laws, there are important differences among them.

For some states, firearms are regularly permitted. Public colleges and universities in Utah and Arkansas must allow any individual with an appropriate permit to carry a concealed gun on campus, including inside campus buildings. In Tennessee, full-time employees, but not students, may carry concealed weapons.

A handful of states have given schools some measure of autonomy. In Wisconsin and Kansas, public institutions may choose to prohibit guns in specific buildings, but guns must be allowed elsewhere on campus. In Kansas, such an action requires the school to put in place certain security measures, like metal detectors and armed security guards in the buildings where guns have been banned.

Meanwhile, some states are quite specific when it comes to one area of campus: sporting events. Earlier this year, Arkansas passed its campus carry law, which was quickly amended to prohibit guns at athletic contests. Georgia also doesn’t allow guns at college sporting events, but the law does allow concealed handguns at tailgating.

What about the other 39 states?

Individual colleges and universities have discretion in 23 states to decide whether guns are allowed on their campus. Among these, public institutions in Ohio can set their own policies when it comes to guns in campus areas and buildings, but firearms are allowed by law to be in locked cars in parking areas.

The final 16 states prohibit outright the concealed carrying of guns at any college or university. From our perspective – and based on an emerging body of research – allowing individuals to carry guns on campus is not an effective way to prevent mass shootings and, in fact, may be more likely to lead to violent outcomes.

Recent research by scholars at Johns Hopkins University discusses how guns on campus may allow suicidal individuals easier access to firearms. They note this is especially troubling since younger people, highly represented on college campuses, can be more susceptible to suicidal behavior that results in death or hospitalization. Indeed, suicide is the second-leading cause of death among college-aged individuals.

In general, gun deaths are more likely connected to personal disputes or domestic violence than mass shootings. The researchers at Johns Hopkins suggests that trend is true on college campuses as well, with gun incidents more likely to involve interpersonal conflict than a random shooting event.

While not focused specifically on campus gun laws, another new study determined that states with concealed carry laws have experienced increases in violent crime.

We believe that, rather than an effective deterrent to violence, guns on campus are more likely to put people at risk. Students and faculty across the country have protested against legislation that permits guns on college campuses.
AP Photo/John Miller

What do colleges think?

The prevailing sentiments at many schools across the U.S. seem to suggest that institutions of higher learning likely don’t view campus carry as enhancing safety.

While public colleges and universities in Texas must allow firearms to be carried, private institutions have the option of adopting campus carry under the state’s law. Yet, so far, only one private university in the state has done so.

What’s more, several universities in campus carry states have sought to challenge state laws. While ultimately unsuccessful, public institutions in Utah and Colorado engaged in lawsuits in an effort to keep guns off their campuses.

Dozens of recent incidents at colleges across the country have shown that campuses are currently epicenters of protest and unrest. The recent violence prompted by white nationalist gatherings at and near the University of Virginia highlighted this in a disturbing fashion.

In short, it’s not unreasonable to expect university administrators to be concerned that permitting guns on their campuses could lead to violence, cause fear in their community, and interfere with their educational mission.

These are the same administrators who can limit educational and civic activities that they feel are potentially dangerous (like making campus venues unavailable for certain events). But in 11 states, administrators aren’t able to make these decisions when it comes to faculty and students carrying concealed weapons.

We believe that guns on campus should be prohibited outright – as they are in many states. However, if states insist on maintaining campus carry laws, institutions should at least be given the legal discretion to design appropriate policies for their unique campus contexts.