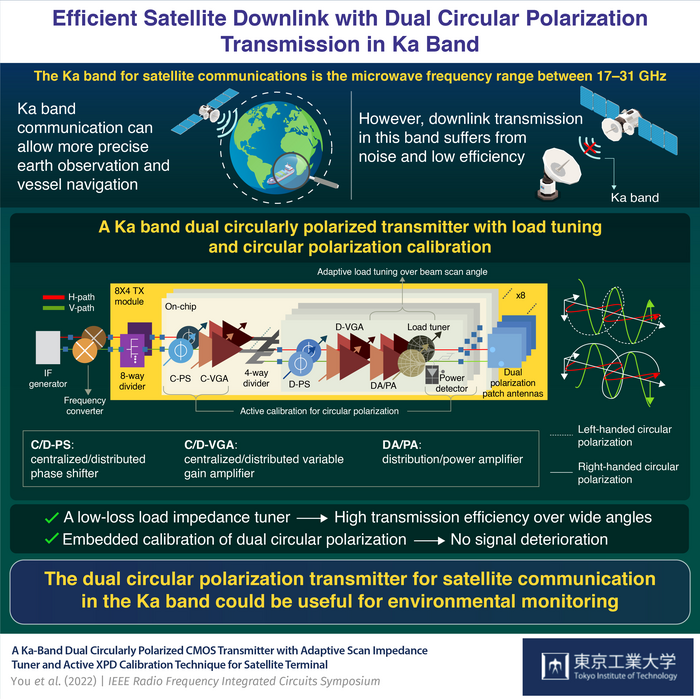 Low earth orbit (LEO) satellites are being increasingly used for environmental monitoring of the earth, as well for logistic purposes, such as the navigation of maritime vessels. The data transmitted from the satellite terminals to the receivers on Earth, known as “downlink,” is steadily increasing and, as a result, requires new frequency domains. In this regard, the Ka band for satellite communication in the microwave frequency range between 17–31 GHz offers several advantages. The Ka band allows for smaller antennas than those for conventional downlink frequencies and a phased array-based transmission, which enables transmission link control independent of the satellite position. However, transmission devices in the Ka range have so far been largely inefficient owing to a degradation of the signal beam polarization with the transmitter changing direction. The degraded polarization appears as noise in the receiver, reducing the signal-to-noise ratio.

Against this backdrop, researchers from Tokyo Institute of Technology (Tokyo Tech), Japan have now proposed, in a new study, what is the first reported dual circular polarization transmitter for satellites in the Ka band based on a standard silicon CMOS process. Their work was presented in the IEEE Radio Frequency Integrated Circuits Symposium and published in the conference proceedings. “In our study, we were able to lower the losses and increase the transmission efficiency by using an adaptive impedance tuning circuitry, realized with a low-loss pi-type transformer-based load tuner. With this innovation, a satellite will be able to transmit to a receiver on earth for a wide range of angles,” explains Associate Professor Atsushi Shirane, one of the authors in the study.

Indeed, as the researchers demonstrated, their innovative transmitter design showed a high power efficiency as well as a high equivalent isotropically radiated power over a wide range of angles (from -60° to +60°).

These findings could pave the way for a significant leap in downlink technology. Further, with growing environmental concerns, low-orbit earth monitoring is likely to become more important. In this light, these results highlight the Ka frequency band as a strong candidate for satellites communication in the years to come.