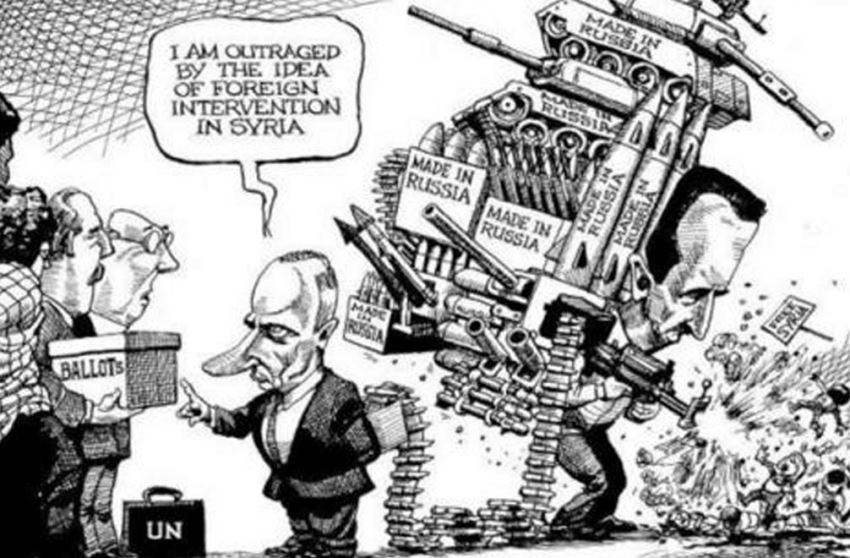 Moscow will soon begin to pay a steep price – in the form of reprisal attacks and casualties — for its escalating military intervention on behalf of the Assad regime in Syria, U.S. Defense Secretary Ashton Carter has warned. Earlier this week, fifty-five leading Muslim clerics, including prominent Islamists, urged “true Muslims” to “give all moral, material, political and military” support to the fight against Assad’s army as well as Iranian and Russian forces. “Russia has created a Frankenstein in the region which it will not be able to control,” warned a senior Qatari diplomat. “With the call to jihad things will change. Everyone will go to fight. Even Muslims who sit in bars. There are 1.5 billion Muslims. Imagine what will happen if 1 percent of them join.”

Moscow will soon begin to pay a steep price – in the form of reprisal attacks and casualties — for its escalating military intervention on behalf of the Assad regime in Syria, U.S. Defense Secretary Ashton Carter has warned. Carter was talking at a meeting of NATO defense ministers in Brussels on Thursday, in which the ministers agreed to increase a NATO response force intended to be deployed quickly to flashpoints in different parts of the world.

Reports from Saudi Arabia and its Gulf allies say that the oil-rich rich Sunni countries are setting in motion a broad strategy to counter the Russian moves in the region. The NATO defense ministers said there were no current plans to deploy the response force to Turkey, but NATO secretary general, Jens Stoltenberg, suggested that to formation of such a response force should deter future Russian or Syrian incursions into Turkish territory.

“We don’t have to deploy the NATO response force or the spearhead force to deliver deterrence,” Stoltenberg said. “The important thing is that any adversary of NATO will know that we are able to deploy.”

Yahoo News reports that Middle East diplomats say that Saudi Arabia, an old foe of the Assad family and a leading supporter of the anti-regime Syrian rebels, was preparing to step up its support, having given up on the United States stepping up its own efforts to support the rebels.

One indication of the seriousness of the Saudi intentions is the fact that ministers from Qatar and Turkey, the Saudis’ partners in the fight against Assad, are holding talks on planning and implementing their next moves in Syria. Turkey and Qatar were among the most ardent supporters of the Muslim Brotherhood in Egypt and its offshoot, the Palestinian Hamas. Both movements have been an anathema to Saudi Arabia. The Saudis have used their billions to fund the Sisi government in Egypt – in July 2013, General Sisi led the Egyptian military in removing the Muslim Brotherhood from power, which the Brotherhood had gained in June 2012 – and then led other Gulf states to break diplomatic relations with Qatar over the latter’s support for the Brotherhood.

Diplomatic relations between Saudi Arabia, the Gulf states, and Qatar were patched up earlier this year.

The anger of Saudi Arabia over Vladimir Putin’s intervention on Assad behalf was expressed, among other things, in a statement by fifty-five leading Muslim clerics, including prominent Islamists, urging “true Muslims” to “give all moral, material, political and military” support to the fight against Assad’s army as well as Iranian and Russian forces.

“Russia has created a Frankenstein in the region which it will not be able to control,” warned a senior Qatari source. “With the call to jihad things will change. Everyone will go to fight. Even Muslims who sit in bars. There are 1.5 billion Muslims. Imagine what will happen if 1 percent of them join.”

Saudi Arabia and Turkey lead a group of Sunni states which insist that Assad must go as a condition of any political solution to the war in Syria, and that he cannot be part of any political transition. This used to be the U.S. position as well, but in the last year the United States, Britain, and other Western countries have indicated that they would be willing to entertain the idea of Assad being part of political transition in Syria – but only for a period of few months, not years.

In response to the escalating support by Russia and Iran to Assad, Saudi Arabia and the Gulf states are expected to increase their financial aid to rebel groups and deliver large quantities of weapons to the rebels through Turkey. King Salman of Saudi Arabia is scheduled to Moscow next week, but the trip was scheduled long ago, and it remains to be seen whether the king will cancel it, which will be another indication of the growing tensions between the pro- and anti-Assad camps.

The Russian defense ministry said its planes had carried out more bombing missions over Syria overnight. Military analysts studying the areas where the Russian military is bombing, and the targets of the bombing, say that as has been the case since Wednesday ten day ago, when Russia began its air campaign, Russia is not targeting ISIS forces but instead focusing on non-ISIS anti-regime groups supported by the United States, Saudi Arabia, and Turkey.

In Brussels, Carter said that the Russian military campaign, including airstrikes and ship-launched cruise missiles, was not targeting ISIS but represented a Russian decision “to double down on a longstanding relationship with Assad.”

“They have initiated a joint ground offensive with the Syrian regime, shattering the facade that they are there to fight ISIL [ISIS],” he added. “This will have consequences for Russia itself, which is rightly fearful of attacks. In coming days, the Russians will begin to suffer from casualties.” Carter also said that Russian missiles had been fired without giving notice to other states in the region and came within a few miles of hitting a U.S. drone over Syrian airspace.

“We’ve seen increasingly unprofessional behavior from Russian forces. They violated Turkish airspace … They shot cruise missiles from the Caspian Sea without warning,” Carter said. He restated, however, the U.S. refusal to coordinate its own air campaign against ISIS with Russian forces because of Moscow’s emphasis on supporting the Syrian president. He said that aircraft bombing Islamist militants in Syria were re-routed at least once to avoid a close encounter with Russian planes on their way to bombing non-ISIS rebels.

Germany’s defense minister, Ursula von der Leyen, said Russia must recognize that if it targeted opposition groups in Syria which are fightingISIS, “Russia will strengthen Isis and this can be neither in the Russian interest, nor in our interest.”

Military analysts say it is unclear whether the Assad regime will be able to conduct major ground operations against the rebels because the Syria army, after more than four years of fighting and without manpower reserve beyond the small Alawite community, no longer exists as an organized, cohesive force.

The army is now exclusively Alawite, as Sunni, Druze, Kurds, and Christian soldiers have deserted, and young non-Alawite Syrians no longer report to conscription centers.

Hezbollah has sent about 5,000 of its best soldiers to help Assad, but this is a tiny number relative to Assad’s needs. Iran is now increasing its own forces in Syria from the current 1,500 to about 3,000 – but these are not soldiers, but rather military advisers, intelligence officers, logistical specialists, and engineers. The Russian chief of staff said last week that if there were Russian “volunteers” who wanted to go to Syria to fight on behalf of the Assad government, there would be no way to stop them, but as is the case in eastern Ukraine, these “volunteers” are likely to number in the high hundreds or low thousands, not enough to make a difference on the ground.

“Russia is primarily targeting opposition fighters, and this could end any future peace process in Syria and strengthen the role of Islamic State and the extreme factions that do not want peace, whether they support or oppose the regime,” said the Syrian Observatory of Human Rights’ (SOHR) director, Rami Abdul Rahman.