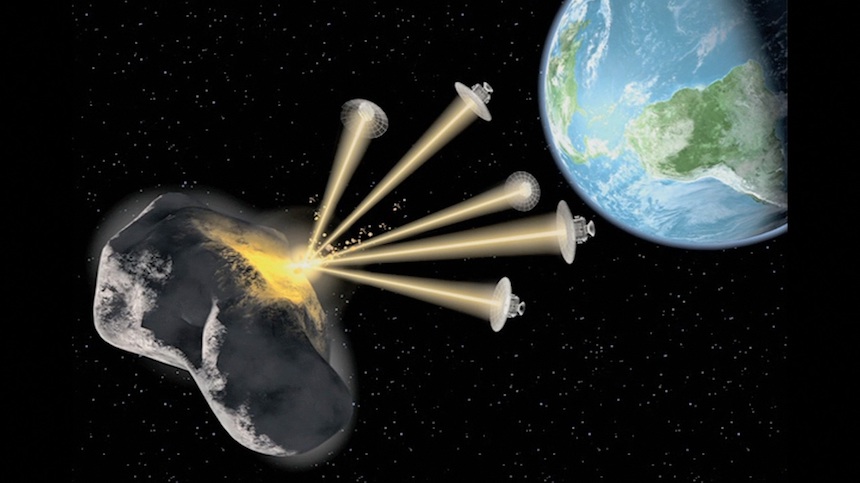 For the first time, NASA will use an actual space rock for an observational campaign to test NASA’s network of observatories and scientists who work with planetary defense. The asteroid, named 2012 TC4, does not pose a threat to the Earth, but NASA is using it as a test object for an observational campaign because of its close flyby on 12 October 2017.

NASA has conducted such preparedness drills rehearsing various aspects of an asteroid impact, such as deflection, evacuation and disaster relief, with other entities in the past. Traditionally, however, these exercises involved hypothetical impactors, prompting Vishnu Reddy of the University of Arizona’s Lunar and Planetary Laboratory to propose a slightly more realistic scenario, one that revolves around an actual close approach of a near-Earth asteroid, or NEA.

“The question is: How prepared are we for the next cosmic threat?” said Reddy, an assistant professor of planetary science at the Lunar and Planetary Laboratory. “So we proposed an observational campaign to exercise the network and test how ready we are for a potential impact by a hazardous asteroid.”

UA says that NASA’s Planetary Defense Coordination Office, or PDCO, the federal entity in charge of coordinating efforts to protect Earth from hazardous asteroids, accepted Reddy’s idea to conduct an observational campaign as part of assessing its Earth-based defense network and identified the upcoming close approach of 2012 TC4 as a good opportunity to conduct the exercise. Reddy will assist Michael Kelley, who serves as a program scientist with NASA PDCO and as the lead on the exercise.

The goal of the TC4 exercise is to recover, track and characterize 2012 TC4 as a potential impactor in order to exercise the entire system from observations, modeling, prediction and communication.

Measuring between 30 and 100 feet, roughly the same size as the asteroid that exploded over Chelyabinsk, Russia, on 15 February 2013, TC4 was discovered by the Pan-STARRS 1 telescope on 5 October 2012, at Haleakala Observatory on Maui, Hawaii. Given its orbital uncertainty, the asteroid will pass as close as 6,800 kilometers (4,200 miles) above the Earth’s surface.

“This is a team effort that involves more than a dozen observatories, universities and labs across the globe so we can collectively learn the strengths and limitations of our planetary defense capabilities,” said Reddy, who is coordinating the campaign for NASA PDCO.

Since its discovery in 2012, the uncertainty in the asteroid’s orbit has slowly increased, as it would for any asteroid as time passes. Therefore, the first order of business will be to “recover” the object — in other words, nail down its exact path. Reddy and his collaborators hope that depending on its predicted brightness, the asteroid would be visible again to large ground-based telescopes in early August.

“One of the strengths of UA research is partnering with federal agencies or industry to work together in solving some of the grand challenges we face,” said Kimberly Andrews Espy, the UA’s senior vice president for research. “This project is a perfect example of matching UA capabilities — from our world-class imaging to our expertise in space sciences — with an external need.”

The UA is home to the Catalina Sky Survey, one of the most prolific asteroid discoverers, and the Spacewatch project that recovers and tracks faint NEAs. Both teams will take part in the planetary defense exercise.

“Time Is Running Out” for Diplomatic Solution of North Korean Problem: U.S. General