Defense Secretary James Mattis said last Thursday that the United States will continue to work with Pakistan to coordinate military supply routes needed to combat terror networks in Afghanistan, despite the Trump administration’s earlier remarks that it would suspend funds for security assistance to Pakistan until the country takes action against the Afghan Taliban and the Haqqani network terror groups. 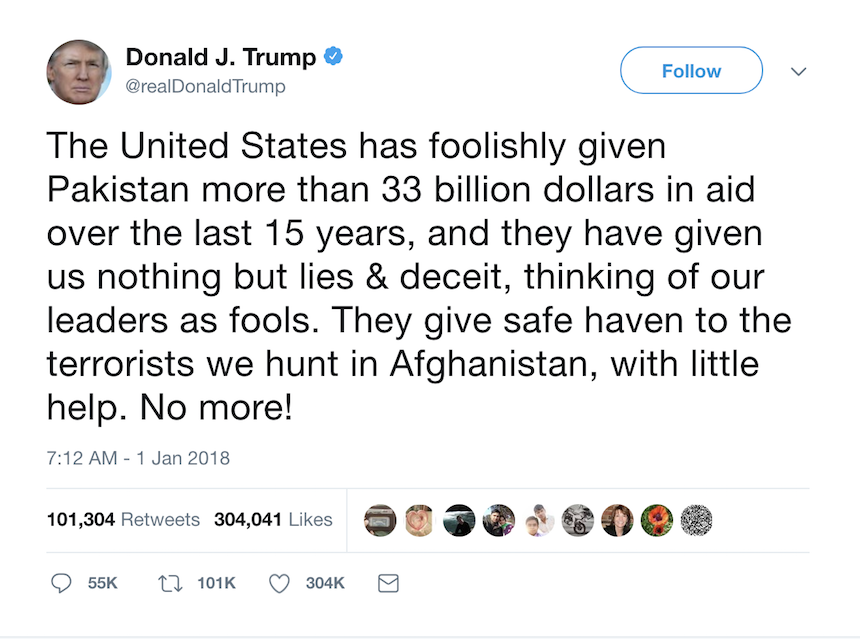 “As you saw in the statement, there were very specific words that said we’re still working with Pakistan, and we would restore the aid if we see decisive movements against the terrorists who are as much of a threat against Pakistan as they are against us,” Mattis told reporters at the Pentagon.

Pakistan has since pushed back on the Trump administration’s move. “We are engaged with the U.S. Administration on the issue of security cooperation and await further details. Impact of U.S. decision on pursuit of common objectives is also likely to emerge more clearly in due course of time. It, however, needs to be appreciated that Pakistan has fought the war against terrorism largely from its own resources which has cost over $120 billion in 15 years. We are determined to continue to do all it takes to secure the lives of our citizens and broader stability in the region,” a statement last Friday by the country’s Foreign Office read.

The suspension will not affect civilian aid or USAID funding to Pakistan and the frozen funds can be released if Pakistan takes action against the terror networks mentioned. “Our hope is that they will see this as a further indication of this administration’s immense frustration with the trajectory of our relationship and that they need to be serious about taking the steps we have asked in order to put it on more solid footing,” a senior State Department official told reporters last week. “We’re hoping that Pakistan will see this as an incentive, not a punishment,” he added.

Several members of Congress agree with the Trump administration’s freeze of some military aid to Pakistan, accusing the country of playing a double game by allowing sanctuary for some militant groups as the United States fights terror along the Afghanistan-Pakistan border. “Pakistan is one of the most duplicitous governments I’ve had any involvement with,” Senator Bob Corker, Republican chairman of the Senate Foreign Relations Committee, told reporters. “Their, in essence, support of the Haqqani network, or … allowing them to have safe harbor in their country when they’re the greatest threat to our men and women in uniform.”