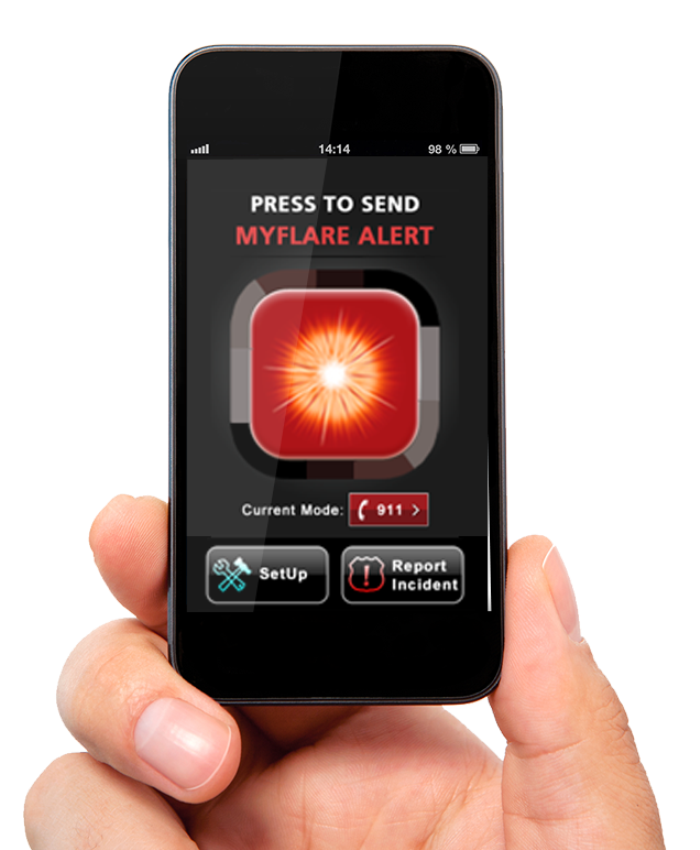 You are walking home after a night out on a dark autumn evening. Suddenly, you get the feeling that someone is following you. You look over your shoulder, and see a shadow between the trees in the park. You quicken your steps. When you glance behind you again, you see the shadow disappear in between two houses. This is when you could press the “help” button on new mobile app, Flare.

Flare sends a message to everyone in the area who also has the app, with information about your phone number and location.

This way they are able to call you, alert emergency services, or get to your location if need be. They will also be able to follow your movements on the map that appears on their phone.

“We want to start a network of users who can help each other, and by doing so, help make the world a little safer,” says Svein Grimholt. He is the brains behind the app, which he is developing while also studying Energy and Environmental Engineering at NTNU.

Idea during student festival
NTNU notes that Grimholt got the idea during the UKA student festival held in Trondheim two years ago. Every other year, ten thousand young people come together during the UKA festival to go to concerts and other large  events. Many of these concerts are in a place called Dødens dal, a small volleyball and football field close to the university, which is located centrally in a highly developed area.

“Right near Dødens dal, there was a rape case, and an attempted rape.” he explains. “This got me thinking that in situations like that, there should be a way to alert people in the area to your need for help.”

And so the first seeds for the idea that became Flare were sown. Together with NTNU students Anders Hua and Jørgen Svennevik Notland from the School of Entrepreneurship, and Stian Sandø, a computer science student, he has developed Flare for both iOS and Android phones. A quick search of “Flare Help and be helped” should bring you to the right place. The app is free and has no ads.

The more, the merrier
“There are apps that resemble ours, but ours is unique in that it is crowdsourced. This means that you reach out to other users that are nearby, so help can potentially arrive much quicker. The average response time for the police is between 15 and 23 minutes, meaning that the damage may already have been done by the time they get there,” Grimholt explains.

The more people who have the app, the better and safer Flare’s network becomes.

“It’s a win-win situation, because the chances of getting help increase both for you and others,” he points out.

This is what the coverage in a city like Trondheim might look like. You set the radius of your signal yourself — the standard setting is 200 meters, but you can set it to as much as 500 meters.

To spread the word about the app, the team is working with “Faddervaktordningen,” a group of volunteer students who work to make the streets of Trondheim safer for new students during the first weeks of the semester. They are also collaborating with “Natteravnene,” a volunteer service that provides preventative security and aid at large events and at night during the weekends, and with the police.

The team believes that the best way to spread the word about the app, however, is through the grapevine.

Not meant as a replacement
It is not unimaginable that this app might mobilize people who would like take matters into their own hands. The team, however, rejects the idea that it might encourage vigilantism.

“We’re very careful to communicate that people shouldn’t take the law into their own hands. We recommend first trying to call the person in need of help, to assess the situation and establish contact. After this, you should call appropriate emergency services. Going to the scene of distress should always be considered carefully — it’s important that you always put your own safety first,” Grimholt points out.

Flare is not meant as a replacement for emergency services, but to supplement them.

“We recommend contacting emergency services if possible, which you can do directly through the app. But there are many different situations where a conversation on the telephone is difficult or impossible. In these cases, Flare can help get the message out,” says app developer Anders Hua.

Danger of misuse
But what about people who send out prank emergency calls in the wee hours of the morning?

“We’ve taken several measures to prevent misuse of the service. The app requires verification with your phone number, so your user is connected to your identity. The information about both the person who sends out an alarm call and everyone who receives it is stored for a certain period of time, so we can go in and retrieve the info if there is a problem,” says designer Stian Sandø, who has taken a year off his studies at NTNU to work as a host on a children’s science television program produced by the Norwegian Broadcasting Corporation called “Newton.”

If anyone were to activate the alarm as a joke, they will likely receive a phone call, and possibly meet the people who respond. And those who respond will likely be less than pleased by the prank.

“We think that the fact that you publicize your phone number and location when you send out an alert will help minimize this type of abuse. It is in everyone’s interest that the app is used correctly,” says Jørgen Svennevik Notland.

Won an entrepreneurship startup package
NTNU says that one year ago, the founders of the app were one of five winners of the Inven2Start entrepreneurship contest. The contest is an initiative to encourage new student companies, and the winners each receive a startup package to help start a company based on their idea. The package consists of 30,000 kroner from Inven2Start and 100,000 kroner from Innovation Norway.

The Flare team, who are all studying different subjects, chose to spend their summer concentrating on developing the app and planning its launch and distribution. They spent two months in a maker space in Berlin

Ambitions
The preliminary target group is students in Trondheim, but ultimately the goal is to establish the app nationally.

“We would like to make this a standard program on all phones. Our ultimate dream is to have Flare be built into the national alarm central’s warning system,” says Grimholt.

They have also been thinking of other areas of use for an idea like this, such as for a warning app against bullying.

“It could make a good preventative tool against bullying. If all of the teachers at a school have the app on their phones, it would be easy to get the word out about problems in the schoolyard,” he said.