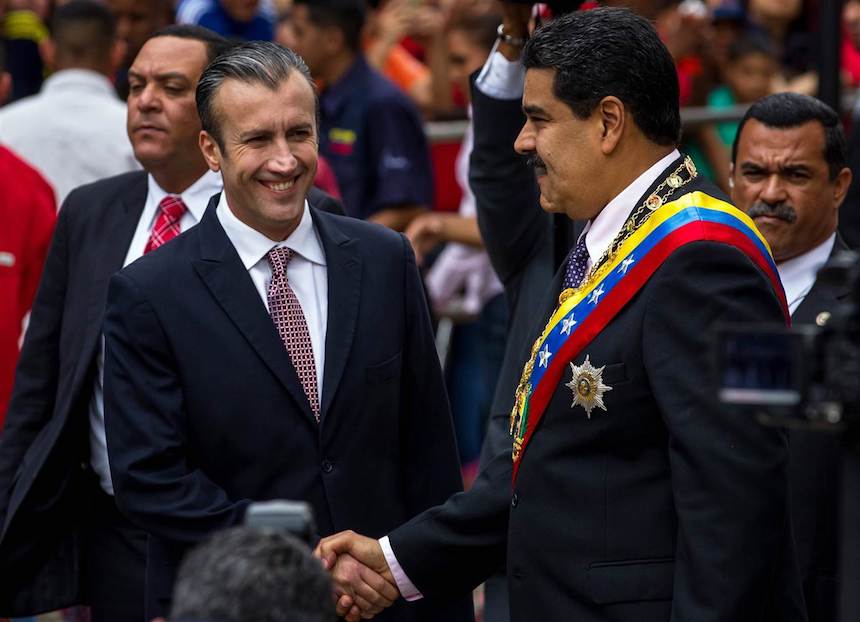 The Trump administration on Monday announced it had imposed sanctions on Venezuela’s vice-president, Tareck El Aissami, charging that he was a major drug trafficker. The announcement, made on the Treasury Department’s website, is likely to worsen the already-tense relations between the United States and Venezuela. El Aissami is the most senior Venezuelan official – and one of the most senior Latin American official — to have been charged of drug offenses by the United States.

The Wall Street Journal reports that the United States has also imposed sanctions on Samark López, a wealthy Venezuelan businessman believed to be El Aissami’s main front man in the drug business. Thirteen of the companies owned or controlled by López, including five in Florida, have been blocked and both men are barred from entering the United States.

The punitive measures against Venezuela’s vice-president follow a letter, sent last week by a bipartisan group of thirty-four lawmakers to President Donald Trump, urged him to increase the pressure on Venezuela’s leftist government by imposing sanctioning on top government and business figures top officials accused of human rights violations, corruption, criminal activity — and for association with terrorist groups, as is the ase with El Aissami, who has been accused of ties to Hezbollah.

As the government of President Nicolás Maduro became more repressive, the U.S. Congress, in 2014, passed a bill authorizing the president to freeze the assets and ban visas for anyone accused of carrying out acts of violence or violating the human rights of Venezuelans opposing the government.

In the case of El Aissami, the Treasury Department also relied on laws allowing the United States to go after the assets of anyone designated a drug kingpin.

El Aissami has caught the eye of U.S. law enforcement years ago, when, as interior minister in the government of Hugi Chavez, he ordered his underlings to issue dozens of fraudulent Venezuelan passports to people from the Middle East, including members of Hezbollah.

Venezuela’s top drug kingpin, Walid Makled, while in Colombian jail, provide information about bribes he paid to El Aissami’s brother in order to have Venezuelan officials turn a blind eye to cocaine shipments through Venezuela.

El Aissami was named vice-president last month. Since El Aissami became vice-president, Maduro has given him control of an “anti-coup commando unit” to go after officials and opponents suspected of anti-government sentiments.

In sanctioning El Aissami, the administration has activated a plan which has been in the works for months. It was held up for a few months to allow the Vatican to mediate between the Venezuelan government and the opposition, and the gain the release of an American citizen being held in a Venezuelan jail on trumped-up charges.

“This was an overdue step to ratchet up pressure on the Venezuelan regime and signal that top officials will suffer consequences if they continue to engage in massive corruption, abuse human rights and [the dismantling of] democracy,” said Mark Feierstein, who served as Barack Obama’s top national security adviser on Latin America.

“The sanctions in and of themselves will not bring about a democratic transition,” Feierstein said. “That will require the Venezuelan opposition to remobilize its followers and U.S.diplomatic efforts to marshal governments in the region to isolate Maduro.”

Last fall Maduro described Trump as a “bandit” and “mental patient” during the campaign. Last month he said: “He won’t be worse than Obama, that’s the only thing I dare to say.”

Disease “Superspreaders” Were the Driving Cause of 2014 Ebola Epidemic