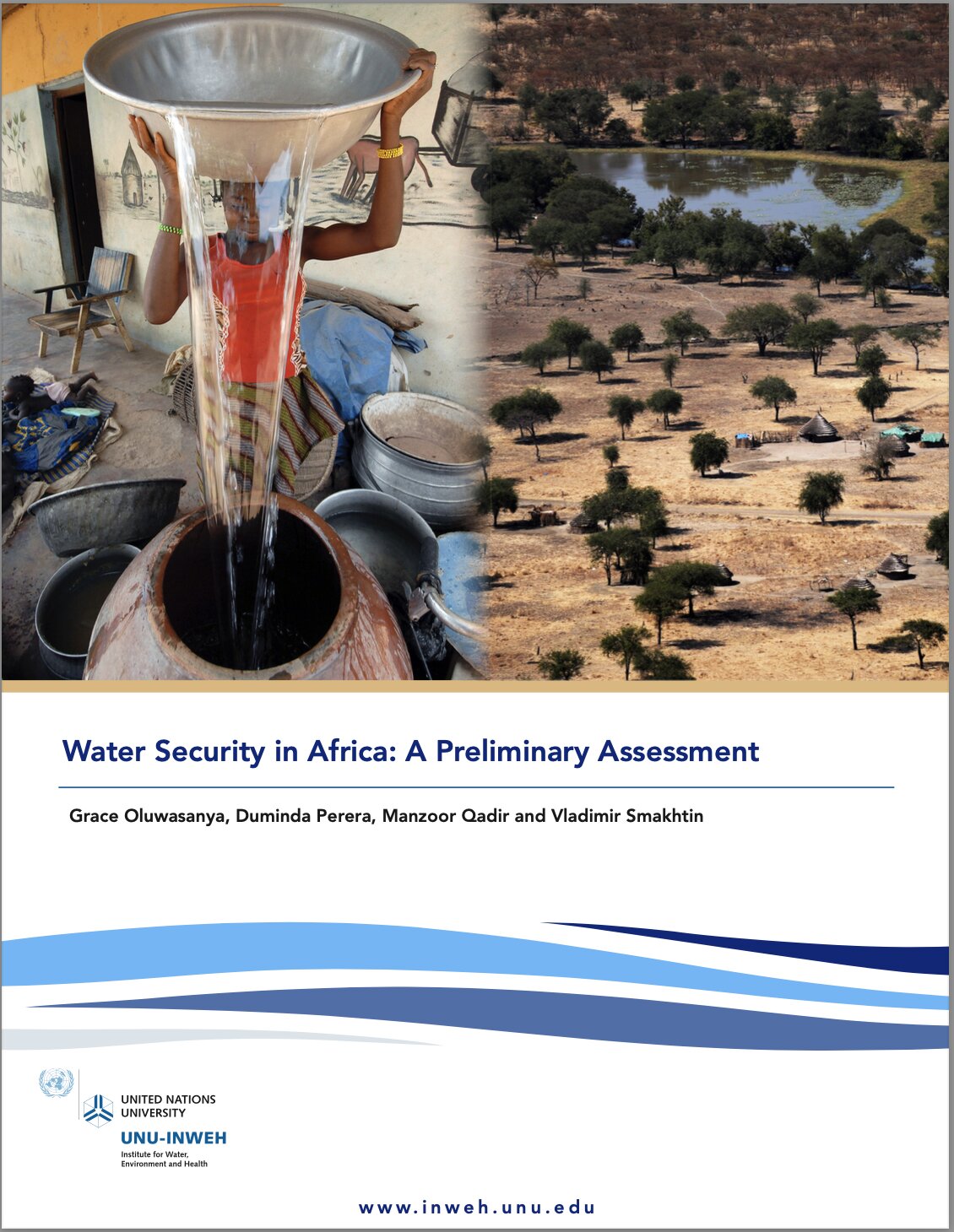 Despite global Sustainable Development Goals and commitments made in 2015, just 29 African nations have made some progress over the past three to five years, 25 have made none, according to the UN’s first-ever assessment of water security in Africa.

Published on the eve of World Water Day (March 22) by UN University’s Canadian-based Institute for Water Environment and Health, the assessment employed 10 indicators to quantify water security in Africa’s 54 countries.  Water security is elaborated below.

UNU-INWEH authors Grace Oluwasanya, Duminda Perera, Manzoor Qadir and Vladimir Smakhtin, the Institute’s Director, say the assessment is limited by “very poor” data on water security-related issues such as access to drinking water or sanitation, but it nevertheless offers some “preliminary but obvious conclusions.”

“Data limitations do not change the main outcome of this assessment, which is strong and clear,” says lead author Grace Oluwasanya.  “Overall levels of water security in Africa are low. Not a single country let alone a subregion have at present achieved a state that can be seen as ‘model’ or even ‘effective’ stage of water security.”

Says co-author Duminda Perera: “This assessment for African countries aimed to create a quantitative starting point and a platform for subsequent discussions with national, regional and international agents; it is neither a prescription nor a guide.”

“As this quantitative tool develops, it will help generate targeted policy recommendations and inform decision-making and public-private investments toward achieving water security in Africa.” 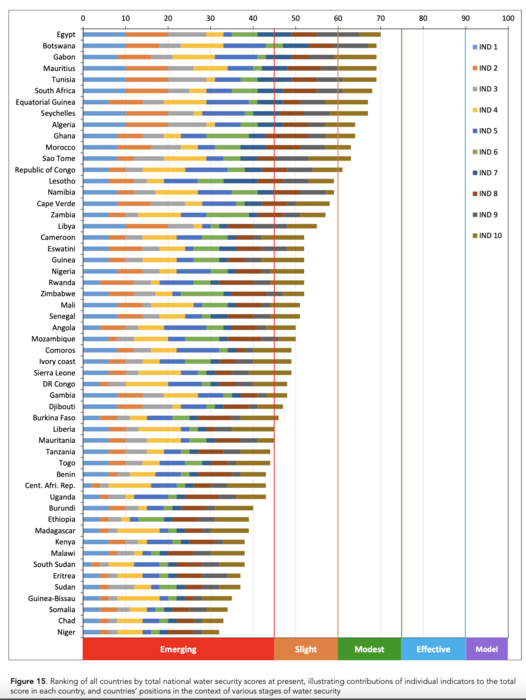 Except for Egypt, all country scores are below 70 (on a scale of 100). Only 13 of 54 countries reached a modest level of water security in recent years, and over a third are deemed to have levels of water security below the threshold of 45.

Together, the 19 countries below the threshold are home to half a billion people.

Egypt, Botswana, Gabon, Mauritius and Tunisia are Africa’s top five most water-secure countries in Africa, yet with only modest absolute levels of water security achieved.

Somalia, Chad and Niger appear to be the least water-secure countries in Africa.

There has been little progress in national water security of most African states over the past three to five years, the report finds. The number of countries that made some progress (29) is close to the number of those that made none (25).

Access to drinking water ranged from 99% in Egypt to 37% in the Central African Republic, and between subregions from 92% in North Africa to 62% in Central Africa. Africa’s average basic drinking water service is 71%, “leaving behind some 29% of the total population” or more than 353 million people.

Access to sanitation is broadly similar at the subregional level, but a few countries — Seychelles and most countries in North Africa countries — have reached or nearly reached 100%. The most challenged countries are Chad and Ethiopia (under 20% access), with 60% average access to even limited sanitation; thus at least 40% of the total population (483 million people) are left behind.

Access to hygiene facilities and practices (e.g. hand washing) are greatest in North Africa (67%), worst in West Africa (with Rwanda, Liberia lowest among eight countries with less than 10% access; Chad and the Central African Republic suffer the highest number of deaths from diarrhea).

Per capita water availability is highest in Central Africa (with the Republic of Congo considered Africa’s most water-rich country — over 31,000 cubic meters per capita), while half of North African countries appear to be absolutely water scarce — less than 500 cubic meters of water per capita per annum. Due to their population growth, water availability has recently declined in West, Central and Southern Africa sub-region, and, on a country scale, in Ivory Coast, Cameroon, Somalia, Mozambique, and Malawi.

Water use efficiency appears to be lowest in North Africa (with Somalia lowest at the national level) highest in Central Africa (with Angola highest at a national level). In general, agriculture-dominant countries score lower.  An improvement seen in water use efficiency in Africa as a whole is primarily due to efforts in Tunisia, Gambia, Burkina Faso, Rwanda, and Uganda, but poor data quality makes assessment difficult.

Water infrastructure is deemed best in the Southern Africa sub-region, worst in East Africa. South Africa, with over 25% of all large dams in Africa, is outscored by Ghana, Zimbabwe, and Zambia, likely due to just one mega reservoir in those countries. Half of all countries score very low, reflecting the continent’s low level of water storage development. Only Ethiopia and Namibia have increased their storage over recent years, while Ivory Coast and Gabon have shown a decline, partly explained by rising populations with no or minimal increase in storage. Africa-average per capita storage capacity increased by only 3% over five recent years.

Water governance appears to be most advanced in North and Southern Africa sub-regions, while Central Africa the least advanced. Nationally, Ghana reported reaching 86% of Integrated Water Resource Management (IWRM) implementation, a significant improvement in just two years. Liberia, Guinea-Bissau, and Comoros are the lowest-performing countries, but again the assessment may be affected by the quality of national reporting.

Disaster risk has either remained unchanged (North and Southern Africa sub-regions) or increased. North Africa appears to be the least risky subregion, West Africa the riskiest. Egypt appears to be the least risky country, while Cape Verde is the most, followed by Djibouti and Comoros. Some 49 of 54 African countries have seen increased disaster risk scores over five recent years, explained by the impacts of changing climate worsening countries’ exposure to natural disasters and outpacing their ability to adapt.

Water dependency on neighboring nations and water resources variability:  Egypt stands out as Africa’s most water-dependent country; the Southern Africa sub-region has the most variable water resources. Naturally existing physiographic conditions may, to an extent, determine how much effort is needed for a country to achieve higher levels of water security.

“Some critical components of water security simply cannot be assessed without introducing surrogates or proxies,” as used in the report in the case of drinking water and sanitation, for example.

“With such poor data availability, progress toward water security is difficult to assess accurately.”

For example, it is not possible to estimate the percentage of the African population that will have access to safely managed drinking water services or safely managed sanitation by 2030, a key UN Sustainable Development Goal globally agreed in 2015.

“Data availability – or the lack of it – in itself may be an excellent indicator of water security,” says Dr. Oluwasanya. “Action needs to be taken immediately by national governments with support from international agents to radically improve data collection efforts for Africa.”

What is water security?

Hence water security is not just about how much natural water a country has but also how well the resource is managed.  It is defined as “The capacity of a population to safeguard sustainable access to adequate quantities of acceptable quality water for sustaining livelihoods, human well-being, and socio-economic development, for ensuring protection against water-borne pollution and water-related disasters, and for preserving ecosystems in a climate of peace and political stability.”

UNU-INWEH led the UN’s development and definition of water security and its related tools are now the most widely-accepted in the world.  This was a fundamental milestone, contributing to conceptualization of the SDGs and to on-going efforts to assess national water security in a quantifiable way.

The assessment tool is still a work in progress, Dr. Smakhtin notes, adding that UNU-INWEH’s goal is to have by 2025 — five years before the deadline for meeting the UN’s Agenda 2030 — “an improved, influential and nationally-owned tool” for assessing water security in all African countries.